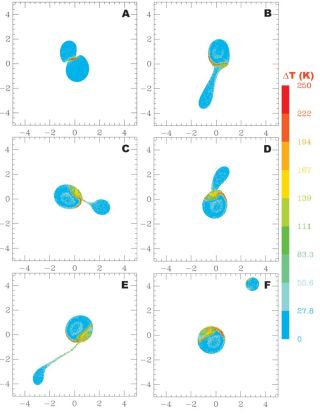 JUST AFTER IMPACT: Click to see the whole scenario of a Pluto-sized object hitting Pluto, then forming a moon. Color indicates temperature, while distance is show in units of 1,000 kilometers. image
(Image: © Robin Canup/ © Science)

Pluto might have been hit long ago by a virtual twin in a collision that created the ninth planet's moon Charon, according to a new computer simulation.

The scenario is similar to the leading theory for the creation of Earth's Moon, another cosmic crack-up that involved a Mars-sized object slamming into our own planet.

That similarity doesn't mean our Moon and Charon formed in the same way, but it suggested a relationship that ought to be explored.

The new simulation, detailed in the Jan. 28 issue of the journal Science, was generated by Robin Canup of the Southwest Research Institute. In 2001, Canup produced a computer model that helped solidify the impact theory for the creation of Earth's Moon, an idea that dates back to the 1970s and is now widely accepted as the most probable.

Now Canup has turned her attention to the Pluto-Charon system, for which other theorists proposed a similar impact solution in the 1980s. Until now, however, no models of the suspected Pluto collision have successfully created Charon. The most likely alternative is that Pluto captured Charon, just as some small moons of Saturn and Jupiter are thought to have lured into orbit.

Canup envisions a glancing blow early in the solar system's history. Rather than a car broadsiding another at an intersection, imagine them merging into one another at a freeway onramp, though at a rather sharp angle of about 60 degrees.

Canup explained for SPACE.com what might have happened as the two objects got tweaked out of shape like cosmic Silly Putty, then spin around one another:

"After the initial oblique impact, the impactor is partially sheared apart into an 'arm' of material," Canup said. "The impactor material largely recoalesces into an intact moon which is torqued gravitationally into a stable orbit through its interactions with the distorted figure of the planet."

Pluto was temporarily contorted into the unlikely shape of an egg.

The simulation does a good job explaining the presence of a moon so massive as Charon, and it also aptly describes the overall angular momentum, or spin, of the two-object system. "An impact seems the simplest way to form the pair," Canup said.

"This work suggests that despite their many differences, our Earth and the tiny, distant Pluto may share a key element in their formation histories," she said. "This provides further support for the emerging view that stochastic [random] impact events may have played an important role in shaping final planetary properties in the early solar system."

Canup cautions, however, that the scenario will be difficult to prove.

With the Earth-Moon system, a glancing collision fits well with the objects' present-day spin and mass. It also explains the Moon's overall iron-depleted composition, which is similar to the outer portions of Earth of which the satellite was presumably forged.

The simulated crash at Pluto creates a satellite that has the same overall composition and density as Pluto, or a lower density, depending on two likely outcomes. If Charon is captured, it could be expected to have similar traits, assuming that most objects in the Kuiper Belt, a region beyond Neptune where Pluto resides, are made of a similar mix of rock and ice.

"I don't see a way to easily distinguish between capture vs. impact just based on the densities of the objects," Canup said. She goes on to point out that other two-object systems in the Kuiper Belt can't have formed by collision. These frozen, rocky pairs have too much overall spin or are too far apart, so they likely were created when one captured the other.

One possible way to bolster the simulation would be to look into the internal structure of Pluto for clues of an impact, Canup said.

The first good opportunity to explore Pluto and Charon -- and any other hidden moons that might lurk in the system -- will come in about 2015 with the expected arrival of NASA's New Horizons spacecraft.

An animation of the suspected impact is available here.