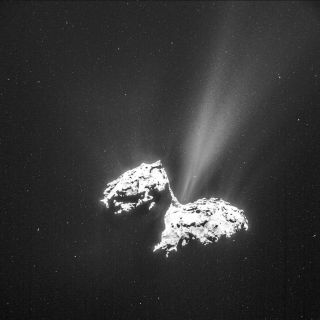 Instruments on the Rosetta spacecraft have detected compounds critical to life, including the amino acid glycine and the element phosphorus, in the shroud of gases surrounding Comet 67P/Churyumov-Gerasimenko.
(Image: © ESA/Rosetta/NAVCAM - CC BY-SA IGO 3.0)

For the first time, scientists have directly detected a crucial amino acid and a rich selection of organic molecules in the dusty atmosphere of a comet, further bolstering the hypothesis that these icy objects delivered some of life's ingredients to Earth.

The amino acid glycine, along with some of its precursor organic molecules and the essential element phosphorus, were spotted in the cloud of gas and dust surrounding Comet 67P/Churyumov-Gerasimenko by the Rosetta spacecraft, which has been orbiting the comet since 2014. While glycine had previously been extracted from cometary dust samples that were brought to Earth by NASA's Stardust mission, this is the first time that the compound has been detected in space, naturally vaporized.

The discovery of those building blocks around a comet supports the idea that comets could have played an essential role in the development of life on early Earth, researchers said. [Photos: Europe's Rosetta Comet Mission in Pictures]

"With all the organics, amino acid and phosphorus, we can say that the comet really contains everything to produce life — except energy," said Kathrin Altwegg of the University of Bern in Switzerland, the principal investigator for the Rosetta mission's ROSINA instrument.

"Energy is completely missing on the comet, so on the comet you cannot form life," Altwegg told Space.com. "But once you have the comet in a warm place — let's say it drops into the ocean — then these molecules get free, they get mobile, they can react, and maybe that's how life starts."

Glycine, one of the simplest amino acids, is usually bound up as a solid, which means it's difficult to detect from afar, Altwegg said.

While scientists have searched for glycine through telescopes in star-forming regions of the sky, the newly reported detection marks the first sighting of the compound in space. In this case, the orbiting Rosetta was close enough to pick up the glycine released by the comet's dust grains as they heated up in the sun.

The study is a powerful confirmation of earlier, earth-bound detections of life's building blocks in comet and meteor material.

"We know the Earth was pretty heavily bombarded both with asteroidal material and cometary material," said Michael A'Hearn, a comet researcher at the University of Maryland who was not involved in the new study.

"There have been various claims of amino acids in meteorites, but all of them have suffered from this problem of contamination on Earth. The Stardust [samples] — which are from a comet, not an asteroid — are probably the least susceptible to the terrestrial contamination problem, but even there the problem is severe," A'Hearn told Space.com. "I think they [Stardust] really did have glycine, but this is a much cleaner detection in many ways."

Amino acids form the basis of proteins, which are complexly folded molecules that are critical to life on Earth. Altwegg's team searched for other amino acids around the comet as well, but located only glycine — the only one that can form without liquid water (as in the frigid reaches of space).

The glycine probably didn't form on the comet itself, Altwegg said, but rather in the broad stretches of dust and debris that made up the solar system before planetary bodies formed.

"The solar system was made out of material which formed in a disk, in a solar nebula," Altwegg said. "In these clouds, it's pretty cold, so the chemistry you do there is catalytic chemistry on the dust surfaces. And these very small dust grains [1 micron in size] are very good to lead to organic chemistry. This is also done in the lab." Earth itself was far too hot for similar delicate amino acids to survive its formation, Altwegg said; only the smallest solar system bodies stayed cold.

So glycine formed during that time could have provided a boost to newly forming life if it was delivered to Earth by comets.

"It's not that it couldn't have formed on Earth — it certainly could — it's just that it didn't have to," A'Hearn said. "Basically, the Earth got a head start."

Other, more complex amino acids require liquid water, and so would have likely formed on Earth itself, Altwegg said. This idea is supported by the fact that Rosetta has not identified any amino acids other than glycine near Comet 67P.

Phosphorus is also vital to life as we know it. Among other things, the element is a key constituent of DNA and adenosine triphosphate (ATP), a molecule that stores the chemical energy used by cells. [Video: Comets Are Cupboards For Cooking-Up Life On Earth]

Rosetta is the first spacecraft to bring the right kind of instrument up close to a comet; future probes could examine other comets or even bring frozen samples back for analysis, to see how representative 67P is of comets in general.

But in the meantime, the team is still working on understanding all the organics they found and analyzing them further. "And I think the next step goes to the biochemists, how to make something meaningful out of this," Altwegg said.

The discovery is also significant to researchers trying to understand the conditions of the early solar system, when the comet's nucleus first came together, not to mention conditions when the early Earth was bombarded by similar comets.

"Then you can ask yourself the question: How many Earths are there, how many evolved life or re-evolved life?" she added.

The new work was detailed in the journal Science Advances May 27.