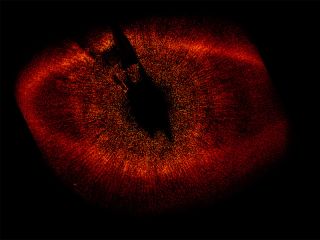 The organic molecules that were the building blocks for life on Earth could have formed in the dusty disk that surrounded our sun before the solar system had planets, a new computer model shows.

What's more, the study suggests the process would be the same around other stars that acquired planets, which means some of those worlds, too, could be seeded with the pieces necessary for life.

Geophysicist Fred Ciesla and astrobiologist Scott Sandford showed in their computer model how the orbiting dust that provided the raw material for planets, asteroids and comets could have been exposed to the ultraviolet light needed to develop organic molecules.

"The origin of these organics has been a mystery," Ciesla told SPACE.com. "There have been a number of places where they have been thought to have formed, and none are mutually exclusive."

Scientists think Earth and the solar system's other planets were formed around 4.5 billion years ago, in a process that began with tiny grains of dust colliding into each other as they orbited the sun, sticking together, forming chunks of rock and gradually building up more and more mass until gravity took over, pulling the chunks together.[7 Theories on the Origin of Life]

Ciesla, of the University of Chicago, and Sandford, of NASA's Ames Research Center in Moffett Field, Calif., built a computer model of this protoplanetary disk of dust grains to test whether organic molecules could have formed there.

Organic compounds include basic molecules such as carbon and nitrogen, as well as more complex forms, such as amino acids and the nucleobases that form DNA and RNA.

Sandford had conducted previous experiments in the lab with sub-millimeter-size dust grains covered in ice. When these are exposed to the photons of ultraviolet light, Sandford found, the photons can break down the molecular bonds in the material, allowing atoms to recombine into more complex molecules.

Scientists were unsure, however, whether enough ultraviolet photons would have penetrated into the early sun's protoplanetary disk to allow organics to form there.

Ciesla and Sandford's model showed this wasn't a problem. In fact, the disk seems to have been dynamic enough that dust grains easily would be lofted onto the outer edges of the disk, where they would be exposed to the ultraviolet light from the sun necessary to form the complex molecules.

"It was exciting for us because it just fell out naturally," Ciesla said. "We didn't have to invoke any special conditions in our model. We just found everything we hoped would work out worked out perfectly."

That means it also should work out well around other stars.

"The dynamics and the processes that we've put in the model here, we don't expect them to be unique to our solar system," Ciesla said. "We expect this to be present in all planet-forming disks."

Still, the fact that organics could have formed in the disk doesn't explain exactly how they got onto Earth. When Earth formed, it would have been a molten mess, with temperatures high enough to destroy any organics present at the time.

However, scientists say organic compounds could have survived on the asteroids and comets left behind in the solar system after the planets formed. As these bodies pummeled the Earth over the eons, they could have deposited the building blocks for life.

The new findings are detailed in the March 30 issue of the journal Science.