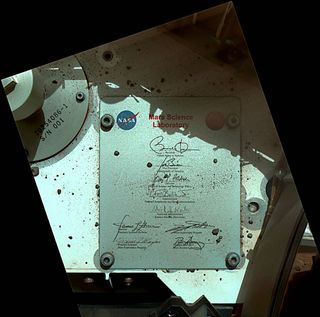 In 2012, the Curiosity Mars rover snapped this photograph of a plaque bearing the signatures of important U.S. officials and Mars Science Laboratory team members.
(Image: © NASA)

NASA's Curiosity Mars rover arrived at the Red Planet in 2012, carrying a special embellishment: a plaque with signatures from the country's top officials, including U.S. President Barack Obama and Vice President Joe Biden.

Last night (Jan. 12), Obama responded to a NASA tweet about that plaque with a thank you, calling it "out of this world."

It also contains signatures of the Mars team leaders: Doug McCuistion, the program director; Michael Meyer, the lead scientist; and Dave Lavery, the program executive for the Mars Science Laboratory (the broader mission name for Curiosity). collectSPACE described the plaque and its signatures just after the rover's launch in 2011.

Similar signature plaques, with the presidential and vice-presidential signatures of the time, are also on NASA's Spirit and Opportunity Mars rovers, officials from NASA's Jet Propulsion Laboratory said in a statement. Curiosity photographed its plaque using its Mars Hand Lens Imager Sept. 19, 2012, on the 44th day of its Martian stay.

Obama is leaving office soon, but Curiosity is still going strong: It's exploring near the base of the immense Mount Sharp, where it recently snapped a photo of purple rocks. Curiosity's main mission is to study the planet's environment and see if it could have hosted life in the ancient past; its many tools and sensors can fire neutrons at, drill and bake a variety of samples (along with taking vivid photographs).

The plaque doesn't host the only signatures on Curiosity; the 12-year-old who named Curiosity, Clara Ma, got to add her name to the rover's base, too.