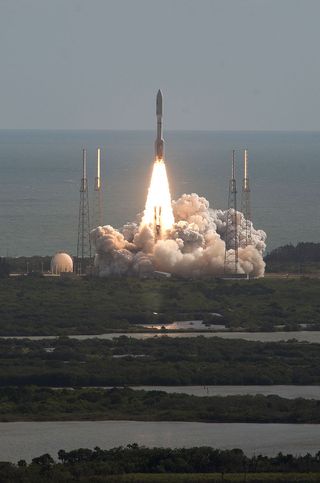 NASA's Mars Science Laboratory with its car-size Curiosity rover is now on its way to the Red Planet after its launch from Cape Canaveral, Fla. on Saturday (Nov. 26).

Outfitted with the most advanced scientific gear ever sent to Mars in an effort to learn whether conditions there can support microbial life, the rover is also equipped with an autograph collection, starting with the signature of the President of the United States.

Starting with a liftoff at 10:02 a.m. EST (1502 GMT) atop a United Launch Alliance (ULA) Atlas V rocket, the Mars Science Laboratory (MSL) spacecraft set off on an 8 1/2 month trip to Mars. The Curiosity rover is expected to land on the planet on Aug. 6, 2012, following a parachute- and retrorocket-assisted descent that will culminate in a sky crane carefully lowering it the final 66 feet (20 meters) to the surface.

Hidden in plain sight on the rover's deck, or its top, is a plaque inscribed with the signatures of President Barack Obama and Vice President Joe Biden, in addition to other administration and NASA leaders. The etched metal plate, which continues a more than 40-year tradition of sending presidential plaques on planetary missions, is only one of the signature collections on board Curiosity. [Photos: Curiosity Rover Launches to Mars]

Elsewhere on the rover is the autograph of the 14-year-old girl from Kansas who gave Curiosity its name, along with millions of digital signatures from members of the public who signed up through NASA. Curiosity itself will also add its own signature to the Martian surface, courtesy of its specially-treaded wheels.

Curiosity's presidential plaque evokes those signed in the late 1960s and early 1970s by Richard Nixon and attached to each of the Apollo spacecraft that landed on the moon.

Also represented on the plate are the president's science advisor John Holdren and NASA administrator and deputy administrator Charles Bolden and Lori Garver. Ed Weiler, who was the space agency's associate administrator for science at the time when the plaque was created some 10 months ago, also signed.

NASA's Mars program leaders round out the autographs on the plate, including Doug McCuistion, program director; Michael Meyer, lead scientist; and Dave Lavery, program executive for the Mars Science Laboratory.

MSL's project manager Peter Theisinger, who was quick to point out he did not sign the plaque, revealed its existence in an interview with collectSPACE.com.

"It's on the rover in the front left corner," Theisinger said, adding that it will be visible and that at some point it will be photographed on Mars by Curiosity's camera-topped mast.

Lavery told collectSPACE.com that arranging for the president to sign required some well-timed planning.

"It turns out getting the president's signature on anything is rather involved," he said. "When we made the request to the White House for permission to launch, we took this along with us and said, 'Oh by the way, if you sign this we will stick it on the rover.'"

President Obama's signature and the others on the plaque were transferred onto the metal plate from a letter they had signed, but one special young lady had the chance to autograph Curiosity's body, adding her name to the rover she named.

Clara Ma was 12 years old when she was selected as the winner of NASA's essay contest to name its new Mars rover . She chose "Curiosity," writing in part that "curiosity is the passion that drives us through our everyday lives."

As part of her prize, she was invited to the Jet Propulsion Laboratory in California, where in June 2009 she donned a "bunny suit" to step into a clean room and sign her name on the rover. The panel she signed was later installed on Curiosity's base.

"I signed my name and then I wrote 'Curiosity,'" Ma told collectSPACE.com, recounting the signing three years later.

Now in ninth grade, Ma said she hopes she might catch a glimpse of her autograph once it's on Mars, but even if not, sending her signature the 352 millions miles (567 million kilometers) is exciting enough.

"Knowing that my name will be on another planet is pretty amazing," she said.

Continue reading at collectSPACE.com to learn about the millions of microscopic "digital signatures" aboard Curiosity and how the rover can sign its own autograph on the Martian surface.