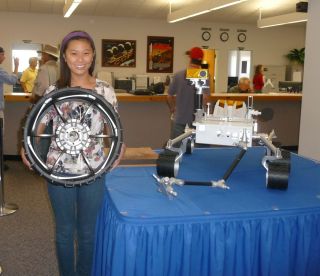 Clara Ma, who named the Curiosity rover as a sixth-grader back in 2009, poses with a scale model of the robot and a full-size mockup of one of its wheels at Kennedy Space Center in Florida on Nov. 25, 2011. The rover launched a day later.
(Image: © Mike Wall/SPACE.com)

CAPE CANAVERAL, Fla. — When NASA's next Mars rover launches toward the Red Planet tomorrow (Nov. 26), the girl who gave the huge robot a name will be there to see it off.

NASA has brought Clara Ma, a Kansas ninth-grader, to Florida to watch the car-size Curiosity rover's liftoff, which is slated for tomorrow at 10:02 a.m. EST (1502 GMT) from Cape Canaveral Air Force Station here. Ma submitted the name "Curiosity" during a NASA contest about three years ago, when she was just a sixth-grader.

Ma said she's happy and honored to be back for the rover's departure from Earth, and to be a part of all the pre-launch hubbub.

"It's just been such a great experience," she told reporters today. "I'm just so lucky to be here, and I hope Curiosity makes it there safely." [Photos: Last Look at Curiosity Rover]

Until 2009, the 1-ton Curiosity rover shared the name of its $2.5 billion mission, which is known as Mars Science Laboratory. MSL seeks to assess whether Mars is, or ever was, capable of supporting microbial life, and will start attempting to answer this question when Curiosity touches down on the Red Planet in August 2012.

NASA wanted the rover to have a moniker of its own, so in late 2008 the space agency asked students to propose one. More than 9,000 entries poured in via snail mail and the Internet, and Ma's rose to the topin May 2009.

Ma said the winning name came to her almost immediately after she learned of the contest.

"The first name that came to my mind was Curiosity," she said.

A couple of other names did pop into her head, Ma added, including "Inspiration," but none of them felt right.

"I kept coming back to Curiosity," Ma said. "Mars is such a mysterious and wonderful planet, and it inspires so many questions in all of us."

After her entry was selected in 2009, Ma traveled to NASA's Jet Propulsion Laboratory in Pasadena, Calif., where Curiosity was built. She got to sign her name directly onto the rover as it was being assembled.

Ma later got to visit NASA headquarters in Washington. And now here she is in Florida, to witness the launch of what NASA officials say is the most complex and capable robotic explorerever sent to another planet.

"I've gotten to do so many cool things, and be a part of all of this," she said. "I kind of feel like I'm kind of part of the family now."

She may end up becoming a full-fledged member of the NASA family someday.

"I'm so interested in astrophysics and space, and that's definitely something I'd like to try, maybe," she said. "I hope I can come here and work."

Former astronaut Leland Melvin, NASA's associate administrator for education, was part of the same press conference today that Ma participated in. He suggested that maybe she could set her sights a little higher, and follow Curiosity to the Red Planet.