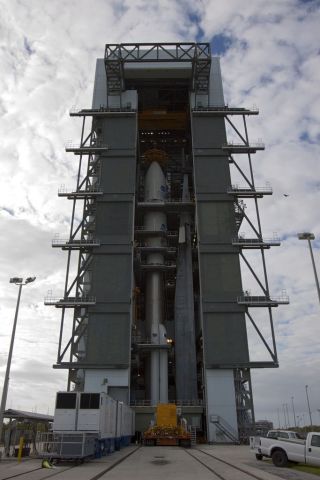 The rocket and rover should be ready to go by then, NASA officials said.

The weather is a bit more of a wild card. A cold front is predicted to move into Florida's Space Coast beginning this evening, likely bringing with it some gusty winds and increased cloud clover by Saturday, weather officials said.

However, current forecasts suggest that weather conditions should still be good enough for Curiosity to get off the ground.

If Curiosity doesn't lift off on Saturday, it should also have a good shot to go Sunday (Nov. 27); conditions should be similar, with a 30 percent chance of a weather-caused cancellation, Tumbiolo said. But the weather will likely deteriorate after that, as another cold front is expected to move in. Tumbiolo pegged the odds of a weather violation on Monday at 70 percent.

The mission's launch window, which is based on a favorable alignment between Earth and Mars, extends through Dec. 18.

The next Mars rover

After it blasts off, Curiosity will embark on an 8 1/2-month cruise to the Red Planet. In August 2012, it will land at a 100-mile-wide (160-kilometer) crater called Gale and begin its mission to assess whether Mars is, or ever was, capable of supporting microbial life.

Gale is a good place to carry out this work, researchers say.

Mars-orbiting spacecraft have spotted evidence there of clays and sulfates, minerals that form in the presence of water. And a 3-mile-high (5-km) sediment mound rises from Gale's center, preserving a multi-layered record of how Mars has changed over time.

Curiosity will use its 10 science instruments to read this record. The 1-ton rover will search for organics — carbon-based compounds that are the building blocks of life as we know it — and perform in-depth geology investigations of Gale's red dirt and rocks.

The MSL team stresses that Curiosity is not embarking upon a life-detection mission; it likely won't be able to spot Martian microbes in the soil, even if they exist. But Curiosity's work will be a key step toward eventually mounting a full-on search for Martian life, and it should deliver plenty of exciting results by itself, officials said.

Curiosity "is an order of magnitude more capable than anything we have ever launched to any planet in the solar system," said Colleen Hartman, assistant associate administrator at NASA's Science Mission Directorate. "It will go longer; it will discover more than we can possibly imagine."