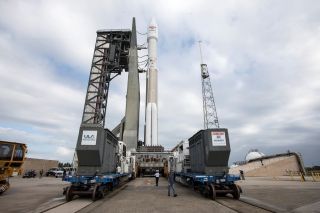 An unmanned Atlas V rocket will launch a powerful new broadband internet satellite into orbit from Florida today (Dec 18) and you can watch the action live online.

Built for satellite operator Hughes, EchoStar 19 (also known as Jupiter 2) is being touted as the company's most powerful internet communications satellite to date.

"EchoStar XIX will be the world's highest capacity broadband satellite in orbit, dramatically increasing capacity for HughesNet high-speed satellite Internet service to homes and businesses in North America," ULA representatives wrote in a mission description. The large satellite features multiple Ka-band spot beams to support customers across North America, and will be stationed in a geosynchronous orbit over 97.1 West longitude to reach Hughes customers.

Hughes representatives said in a statement that EchoStar 19 "will be able to will provide significantly more capacity than EchoStar XVII (EchoStar 17), which was also built by SSL and launched in 2012."