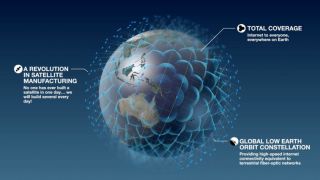 OneWeb intends to cover the Earth with a constellation of more than 600 low-Earth-orbiting smallsats built by Airbus Defence and Space.
(Image: © Airbus video still)

WARSAW, Poland — Start-up satellite Internet provider OneWeb LLC, in a move that will quiet, if not silence its doubters, on June 25 announced that it had raised $500 million in equity from sources as varied as Indian telecommunications network provider Bharti Enterprises, Coca-Cola and cellular network operator Totalplay Telecommunications Inc. of Mexico.

The announcement in London also included the surprise inclusion of satellite fleet operator Intelsat of Luxembourg and McLean, Virginia, whose position as the world’s largest operator of Ku-band satellite capacity — OneWeb is using Ku-band from low Earth orbit — ostensibly makes it a potential OneWeb adversary.

Intelsat said that its relatively modest $25 million cash investment in OneWeb is part of a relationship in which Intelsat’s maritime and aeronautical customers will be able to use OneWeb satellites in areas where coverage is spotty. [Satellite Quiz: How Well Do You Know What's Orbiting Earth?]

The advantage for OneWeb is substantial. Its constellation of 648 satellites operating at 1,200 kilometers in Ku-band faces potential interference issues around the equator, and any interference would be resolved in favor of the established operators in geostationary orbit, like Intelsat.

OneWeb’s regulatory license allows it to operate, but only on condition that its broadcasts do not bother Ku-band signals from satellites in higher orbit, which by virture of being there for the past several decades have established priority with international regulators.

Standing on the shoulders of now-dead constellations of 15 years ago that successfully fought for low-orbiting constellations’ ability to coexist with the geostationary operators, OneWeb has committed to lower its power output around the equator to avoid interference.

With Intelsat now on board, OneWeb customers in the equatorial region will have the option of moving onto Intelsat’s Epic high-throughput satellites, as needed, to assure service in what might otherwise be a frequency-contested environment.

OneWeb Chief Executive Greg Wyler, in a June 25 interview, said the company may strike similar arrangements with other established satellite fleet operators. The only other satellite operator with 50 geostationary satellites in its fleet is SES of Luxembourg, which is the leading investor in O3b Networks, a company with a constellation of medium-Earth-orbit Internet delivery satellites. O3b was founded by Wyler.

“We are not against GEO or MEO systems,” Wyler said. “The addition of Intelsat should demonstrate that. The idea is to get Internet out everywhere on the planet. GEO and MEO and LEO systems can work together for this.”

OneWeb also announced June 25 that the Arianespace consortium of Evry, France, would be the principal launch-service provider for OneWeb’s initial constellation.

Arianespace signed a contract with OneWeb for 21 launches aboard Russian Soyuz rockets, which Arianespace commercializes both at Russia’s Baikonur Cosmodrome in Kazakhstan and at Europe’s Guiana Space Center spaceport on the northeast coast of South America.

The remaining 20 Soyuz launches – the contract includes options for additional Soyuz rockets and the future Ariane 6 vehicle – will occur in 2018 and 2019, each carrying 32 OneWeb satellites. Israel said it’s likely that most of these will occur from the Baikonur launch base.

Israel decline to disclose the contract’s value beyond saying it was between $1 billion and $2 billion. A separate contract with OneWeb will cover design and construction of a dispenser to fit under the Soyuz rocket fairing to carry the OneWeb spacecraft into orbit and separate them.

OneWeb contracted with Virgin Galactic, a division of Virgin Group — an anchor investor in OneWeb — to use the LauncherOne rocket, now in development for 39 launch campaigns, each carrying between one and three satellites for constellation-maintenance duties.

Wyler said that with the satellite builder, launch-service providers and ground-system manufacturers now lined up, he is confident that OneWeb’s total capital cost will be in the previously estimated range of $2.5 billion to $3 billion.

Securing the first $500 million, Wyler said, means OneWeb — based in Britain’s Channel Islands — will not need a second round of funding until 2017.