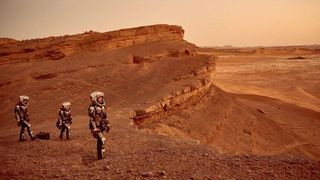 Tonight's (Dec. 5) new episode of National Geographic's "Mars" miniseries will demonstrate the importance of thinking realistically about big dreams while expanding a human settlement on the Red Planet.

The docudrama "Mars" combines real science with a scripted portrayal of the first human mission to the planet, which takes place in the year 2033. Nonfictional documentary segments throughout each episode offer a glimpse at what real scientists and engineers in 2016 are doing to prepare humanity for such an ambitious mission.

In the fourth episode of the six-part miniseries, which airs on the National Geographic Channel at 9 p.m. EST, the future Mars explorers struggle with finding and pushing their own limits. Meanwhile, mission controllers on Earth start dreaming bigger and bigger, potentially putting the Mars colonists at risk. ['Mars': The Epic National Geographic Channel Miniseries in Pictures]

Ed Grann, the French CEO of Mars Mission Corporation (played by Olivier Martinez), will announce his ambitious goals of expanding the human settlement on Mars — more people, habitats, power generators and greenhouses — ahead of schedule. Grann says he would like to see the Mars colony become self-sustaining, meaning that it will no longer require any supplies shipped from Earth, within the next 15 years.

But will the Mars crew and their new colony be ready to dream bigger? Are there limits to how much and how fast a human colony on Mars can safely expand? Technology and ambitions aside, how will the original Mars crew deal with the arrival of more colonists? Tonight's episode, titled "Power," will explore tricky and controversial issues like these. [Red Planet Law: How We'll Share Mars When We Settle]

Experts interviewed for the nonfictional portion of the show discuss the innate human drive to explore and settle new places. They compare colonization of Mars with human settlements in Antarctica. "What happens in the Antarctic is what will likely happen on Mars," David Dinges, a sleep psychologist and chronobiologist at the University of Pennsylvania, says in an interview segment on the show. As with settlers in Antarctica, those who go to Mars will face a cold, lifeless and inhospitable environment that will likely kill people, he says.

Despite the conflicts and struggles of starting a civilization on a bare and foreign planet, things will begin to look up for the Mars crew in tonight's episode. After a treacherous journey from the landing to the arrival at their new home, the crew's lives are starting to look a bit more normal; crops are growing, science experiments are happening, and two crewmembers become the first to make out on Mars.

As more crewmembers arrive on the Red Planet, watch how the new Martians' relationships flourish, and clash, on the National Geographic Channel tonight at 9 p.m. EST.