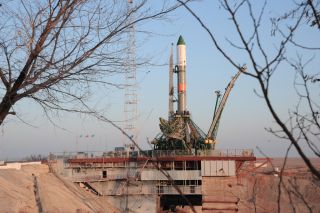 Editor's Note: The Russian space agency Roscosmos has confirmed the loss of the Progress 65 spacecraft, which burned up in the atmosphere after an anomaly occurred during third-stage separation of the rocket booster. Remaining debris from the incinerated spacecraft fell over the Tuva Republic in southern Siberia. Read the full story here: Russian Space Cargo Ship Destroyed in Failed Launch, Debris Burns Up

A cargo resupply mission will launch to the International Space Station (ISS) this morning, and you can watch the spacecraft's liftoff and arrival at the orbiting laboratory via a live webcast.

The uncrewed Russian Progress 65 rocket is scheduled to launch from the Baikonur Cosmodrome in Kazakhstan today (Dec. 1) at 9:51 a.m. EST (1451 GMT). You can watch the Progress cargo ship launch live here at Space.com beginning at 9:30 a.m. EST (1430 GMT), courtesy of NASA TV.

More than 2.5 tons (2.3 metric tons) of food, clothing, fuel, spare parts and other supplies for the space station crew are stuffed inside the cargo ship. [How Russia's Robotic Progress Cargo Ships Work (Infographic)]

After liftoff, the Progress spacecraft will spend about two days chasing the space station. Progress is slated to rendezvous with the ISS on Saturday at 11:43 a.m. EST (1643 GMT), when the spacecraft will connect to the space station via the docking port of the Russian Zvezda module. Video of the docking will also broadcast live via NASA TV, and you can watch that live webcast on Space.com as well.

It's a busy couple of months for crewmembers aboard the ISS. The Progress spacecraft arrives just two weeks after a Russian Soyuz spacecraft delivered three new Expedition 50/51 crewmembers to the space station. On Dec. 9, the Japan Aerospace Exploration Agency will send another unpiloted cargo mission, HTV-6, to deliver supplies.

Progress 65 will spend six months docked at the ISS before being set free to deorbit and burn up in Earth's atmosphere.