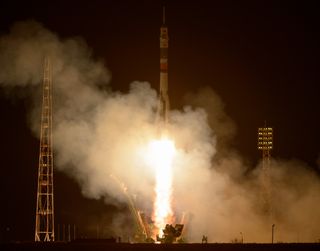 A trio of space travelers from the U.S., Russia and France launched into space Thursday (Nov.17), to kick off a six-month mission to the International Space Station.

Tightly packed in a Soyuz MS-03 space capsule atop a Soyuz FG rocket, the team lifted off from the Baikonur Cosmodrome in Kazakhstan at 3:20 p.m. EST (2020 GMT). About 9 minutes after liftoff, the Soyuz capsule arrived in low-Earth orbit. For the next two days, the space travelers will be chasing after the space station. [See more Expedition 50 Soyuz launch photos]

On Saturday (Nov. 19), the Soyuz spacecraft will catch up to the station and begin to approach for docking. Docking is scheduled for 5:01 p.m. EST (2201 GMT). You can watch a live webcast of the docking here at Space.com, courtesy of NASA TV.

When they enter the space station, the crew will be greeted by three Expedition 49/50 crewmembers who arrived in October: NASA astronaut and ISS commander Shane Kimbrough and Roscosmos cosmonauts Sergey Ryzhikov and Andrey Borisenko. In February, those astronauts will head back to Earth, and Whitson will become the first woman to command the space station twice. In 2007, she became the first-ever female commander of the ISS during Expedition 16.

This mission will be Whitson's third long-duration stay aboard the ISS. Since she became an astronaut in 1996, Whitson has spent 377 days in space and has performed six spacewalks, or extravehicular activities. Whitson told Space.com that spacewalks are her favorite tasks at the ISS, even though they are physically very challenging.

Novitskiy is also a spaceflight veteran, having traveled to the ISS with Expedition 33 in 2012. Before becoming a cosmonaut, Novitskiy was a lieutenant colonel in the Russian Air Force with 700 hours of flight time.

Today marked the beginning of Pesquet's adventures in outer space. He has worked as a spacecraft systems engineer and communicated with astronauts via mission control centers on Earth, but today was his first time experiencing a launch from inside a spacecraft. When a student asked Pesquet about his fears during a press conference, Pesquet admitted, "The day I climb on the rocket, I'm going to be a little bit afraid." He also said that "If you're not afraid, it doesn't mean you're brave. It means you're crazy."

In a press conference, Pesquet said he is looking forward to the hundreds of science experiments he'll perform on board, particularly stem cell research and other experiments that can benefit people on Earth. Making space useful for Earth is important to Pesquet, he explained.

Whitson said she's looking forward to a technology demonstration of the Neutron Star Interior Composition Explorer (NICER), which aims to "develop a space navigation system looking at neutron stars all around us in the galaxy." The idea is to create a GPS system just like the kind we use on Earth, but on a much bigger scale, Whitson explained.

Another experiment will investigate the impact of a new type of LED lighting on the crew's sleep and cognitive performance. These experiments could also be useful for a human journey to Mars, she said.

Even with the hundreds of complex science experiments on tap, Whitson joked that her biggest challenge will be to conquer the Russian language to better communicate with her cosmonaut crewmate.