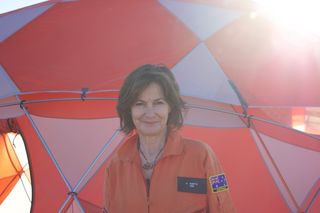 The Mars Society is conducting the ambitious two-phase Mars 160 Twin Desert-Arctic Analog missionto study how seven crewmembers could live, work and perform science on a true mission to Mars. Mars 160 crewmember Annalea Beattie is chronicling the mission, which will spend 80 days at the Mars Desert Research Station in southern Utah desert before venturing far north to Flashline Mars Arctic Research Station on Devon Island, Canada in summer 2017. Here's her sixth dispatch from the mission:

We have such great new neighbors here in the desert. This is the place to be for Mars-related research.

This month, there is a Martian-minded colony of international scientists, engineers and researchers working within 2 kilometers (1.2 miles) of our Mars 160 mission, based at the Mars Desert Research Station in the Utah desert. [See more Mars 160 photos here, and get daily images by the Mars 160 crew]

As we travel out to science field work in our spacesuits, we pass the camps of the Mars Utah Rover Field Investigation Team (MURFI) from the United Kingdom (UK); a contingent from the German Aerospace Center, known by its German acronym, DLR; and the tents of the Canadian Space Agency (CSA).

All of these teams are out in the field testing rovers and using instruments that might travel to Mars. It's thrilling to have such amazing work happening near us.

Like a bunch of microbes, together we are all searching for common survival strategies in this ancient Mars-like desert.

In the past few days, under the guidance of our principal investigator, biologist Shannon Rupert, the Mars 160 crew ran a series of science-operation trials both in and out of simulation. On one of the few days out of spacesuits, some of our crew visited the MURFI camp. This gave me the opportunity to chat to Mission Commander Mike Curtis-Rouse about the goals of the rover field trials.

Understanding how to run a mission is the key focus for Curtis-Rouse and his team, both on and off the field.

Mike says the purpose of the UK mission is to run field trials that develop expertise in mission control. This basically gives the Mission Control scientists in the United Kingdom the experience of planning and controlling planetary robotic missions, using rovers to test instruments in the Utah desert as the perfect analogue environment for Mars.

He and his crew are focused on how to work with Mission Control in the UK to deploy a robot platform with a variety of sensors for science and technical characterization, including instrumentation for future missions such as the European-led ExoMars roverwhere possible. [How Europe's ExoMars Missions to Mars Work (Infographic)]

Mike claims he's a generalist. He has a background in robotics and particle physics, and his experience in planning and execution of military missions within the British Army Reserve ensures that he can get people working together.

In distinct and sometimes difficult and extreme environments, this has its challenges.

As a Mars analogue, the attraction of this environment for rover trials is that the Utah desert is inherently cold and stable in terms of weather (dust and wind aside). There is no GPS on Mars, and robots will have to navigate the landscape by plotting a course through obstacles.

If the weather is changeable and aggressive, as it often is in parts of Europe, it's hard to localize where you are during rover trials. Here in the Utah desert, objects in the landscape remain relatively undisturbed. There is no accelerated erosion that comes with rain and frequent strong winds. This means a boulder that is there in the field one day is usually there the next. These geological features are signposts for the rover and themselves are analogues for GPS.

Mike says rovers are basically dumb and follow a trail of breadcrumbs. They need a series of commands to know where they are coming from and where they are going. And they don't stop for unknown boulders. Today one met Failure Rock and went straight over the top, taking what was left of Failure Rock with it!

The UK rover Q14 is a general-purpose robot designed to simulate a space robot, unlike the Canadian robot, MESR (the Mars Exploration Science Rover), which is an actual robot designed for space. MESR is smart enough to create its own pathway, leaving the Canadian Mission Operations team to identify and characterize rocks that may contain signs of life. [The Search for Life on Mars: A Photo Timeline]

The UK machine is simply a carrier for instruments that will eventually go to Mars and other planets. It has four wheels, some suspension and a tower that allows the team to look around through cameras — but directing exactly where the rover goes still requires careful planning.

One of the advantages for testing out some of the key instruments carried by the robot rover is that, in this desert, there is nothing in the landscape made by humans.

For example, for something like the PanCam — which will be part of the instrument payload on the ExoMars rover, scheduled for launch in 2020 — in terms of image acquisition and location, the skyline needs to be totally clear.

Robotics engineer and PanCam operators Rob Barnes and Steven Kay say that a clear 360-degree view is essential if PanCam is to achieve the high-resolution images needed by geologists at Mission Operations Control. Images are captured and stored on logs, simply as a two-dimensional mosaic, or they can be three-dimensionally mapped, using software like PRO3D.

The purpose of 3D mapping is to measure size and features of the environment. In 3D mapping, we start to see depth, curvatures and textures. The map itself can then be manipulated so that the geologist can get in closer to see context. Maps created here are sent back to geologists at the Mission Control simulation at the Harwell Science and Innovation Campus in the UK as blind data.

Geologists in MOC examine the maps as they would any form of image for aspects of interests — for instance, characterization of soil and local geological features. They send back a command list, a tactical plan and a list of drive commands as well as annotated relevant images to the field team as the science plan for the day.

There are plenty of great tools on this UK mission. It's hard not to be captivated by instruments like the Close-up Imager (CLUPI), a close-up camera system that is like an analogue of the eyes or, to be more accurate, the geologist hand lens. CLUPI gives highly detailed, colored close-up images of rocks, soil, drill core samples and so on, at the tens-of-micrometers to centimeter scale.

In a search for morphological biosignatures, CLUPI can photograph forming laminar biofilms on outcrops and create depth of field by performing multiple images taken at different focus lengths (a process known as z-stacking), improving an understanding of the geological context. CLUPI will be also be part of the instrument payload on the 2020 ExoMars rover.

Then there's an instrument called SPLIT, which is my favorite. A tectonic charmer, this percussive geologist's field hammer splits rock aseptically with its shot-based accumulating crack. Whether on the moon, Mars or the Martian satellites Phobos and Deimos, the low-watt mechanical force of SPLIT could cleave a stone in two, even at temperatures of minus 58 degrees Fahrenheit (minus 50 degrees Celsius). As the drill tip remains at the surface of the object, SPLIT is great for sedimentary fractures. The planes dislocate with ease. SPLIT is about to be trialed on igneous rocks.

Or the Raman spectrometer. Operator Peter Edwards from Leicester University explains the functions of the Raman beautifully. When a laser hits a rock, light reflects and scatters. Most of it will be the same wavelength. Some of it, depending on molecules, will shift in wavelength. Electromagnetic radiation from the illuminated spot is collected with a lens and sent through a filter. Some scattered radiation is then removed.

What remains is the Raman-shifted light that gives us a fingerprint of molecules in the sample — for example, the peaks in a spectrum that help us identify quartz.

Life processes can generate complex molecules. On the ExoMars rover mission, the Raman spectrometer will be used to search for biomarkers on the surface of Mars. [Photos: Europe's ExoMars Missions to Mars in Pictures]

The key focus is the mission itself. What's real is the people. For most of them — the 60 or so who are in the UK at Mission Control Operations, and for some of those who are here — it's all about how they understand the goals of the mission, how the mission is run and how field trials are conducted.

It's that wonderful argument: While robots are great, they can't do what people do. Mike says that no one has yet been able to program a robot to go over there, look at an object and, on the way, if it sees something interesting, to stop and examine it. He suggests that when we get to Mars, robots still won't be able to do what people do. He claims we will always need to send humans to go where robots go, as only humans have that capacity to be curious.

What is fascinating for me about Mike and his UK team is that their goals and ours are complementary, especially when we talk about science operations and mission support.

Mike said, "The UK Rover Trials focus on the operational methods needed for the effective control of a robot proxy on Mars from Earth and the subsequent development of the mission doctrine needed to do this, in an effective and consistent fashion."

And our focus is performing long-term science and science operations in a strict, simulated environment. We investigate the idea of human exploration of Mars from the perspective of astrobiology and human settlement, in association with our Earth-based scientists and Mission Support. So the science operations component is an integral part of our mission as we develop and modify protocols for communications between Earth-based and Mars-based teams.

We have clear science return goals for Mars 160, and how we run our mission is an enormous part of our learning.

Annalea Beattie is an artist and writer based in Melbourne, Australia, and her art practice is based on space science. She is a member of The Mars Society's Mars 160 Twin Desert-Arctic Analog mission, where her art-based research explores how observation is key to the role of all field geologists, including those on a planetary exploration crew. Follow The Mars Society on Twitter at @TheMarsSocietyand on Facebook. Original article on Space.com.