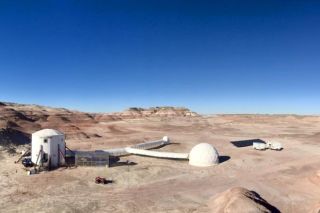 The Mars Society's Mars 160 Twin Desert-Arctic Analog simulation is underway at the Mars Desert Research Station (shown here) in the Utah desert. A seven-member crew is spending 80 days at the habitat for this first phase of the two-part mission.
(Image: © The Mars Society)

On Sept. 24, The Mars Society launched the ambitious two-phase Mars 160 Twin Desert-Arctic Analog simulation to study how seven crewmembers could live, work and perform science on a true mission to Mars. Mars 160 crewmember Annalea Beattie is chronicling the mission, which will spend 80 days at the Mars Desert Research Station in southern Utah desert before venturing far north to Flashline Mars Arctic Research Station on Devon Island, Canada in summer 2017. Here's her first dispatch from the mission:

It's the 22nd of September here in the loft of the Mars Society's Mars Desert Research Station (MDRS) in Utah. It's my first night and I try to call home. There is a time delay from Mars to Tasmania and no response from Mum, no surprises there.

This is the first of our two-phase Mars 160 mission. You might already know that the second phase of our expedition is at Flashline Mars Arctic Research Station in the Arctic circle next year in the Canadian summer. Though there is a break between the two phases, this doesn't matter. Mars 160 is a comparative study in terms of science and science operations.

Downstairs, I can hear the conversation around the table as our crew has a cup of tea before bed. Australian geologist Jon Clarke is talking about how we are the only MDRS crew ever to be able to study two analogue environments in a twin desert study in a way that will help us understand more about conditions on Mars.

An analog is something similar to or representative of something else, like an analog clock. In planetary science, terrestrial analogues enable us to use counterparts of features seen on other planets (in this case, Mars) to better understand them and/or prepare for missions to them.

Analog research is typically field-based and is different from simulation (usually a mathematic or computer model, such as an MIT study of Mars One life support) and laboratory studies (where variables are tightly controlled, such as Mars 500 or at the Human Exploration Research Analog).

In terms of examples of analogue research, these could include scientific, engineering, operations and human factors, for instance as in previous missions at Mars Desert Research Station, Flashline Mars Arctic Research Station, Hi-SEAS and Concordia Station in the Antarctic.

It's true we are on a space simulation though of course some conditions in space can't be replicated, for instance Martian gravity. High in the southern Utah desert at MDRS our crew will be isolated and confined in a tiny space in an immense and extreme environment. We will eat dehydrated astronaut food and never leave the hab without suiting up, except in an emergency. Otherwise we would be breaking mission rules.

Yet the main aim of Mars 160 is not an isolation study of humans in space like recent Hi-Seas where only some of the crew went outside twice a week. Our goal is to see where we can get the most science return in terms of field science and field science operations. The point of our mission is that the two halves of our research links geology and biology in an analogous way to inform our knowledge of an extraterrestrial environment like Mars.

Characterized by the geology, biology for the mission focuses on halophiles in evaporite deposits, (easy to get to here but not so easy in the Arctic circle), lichens and their patterns, (studied more on Devon than here), hypoliths, found usually on the undersides of rocks and stromatolites, (those fossil structures and habitable environments that show the earliest visible signs of life and may have appeared at a time when Mars was habitable).

And btw here we will use the sexy MinION instrument tested on the International Space Station.

Our second goal for Mars 160 is to examine science operations. These are the practices of science. We are especially interested in how Earth-Mars collaborations might function in field science, for instance, how science operations are best conducted on an EVA (extravehicular activity). The kinds of resources used, the tools, the processes the people and the communication procedures all underpin and support good science in the field. In terms of partnerships and outreach our mission has unprecedented Earth-based support for field science. More on this later as over the next few months I introduce our crew and our projects.

I'm washing a few sweaty shirts in this with its upside-down pressure.

But that is fine because stains do not smell. This is not a hygiene issue, it is just a stain. In space we do not care that much about fashion. So in short, the physical process is basic thermodynamics. At sea level atmospheric pressure, we are used to seeing water boiling at 100 degrees Celsius. When you decrease the pressure, the water boils at a lower temperature. So if you decrease the pressure to 50 mbar (1/20th atmospheric pressure) water will boil at room temperature. Basically, at this pressure you can boil water without burning yourself!

This is what happens in the vacuum washing machine. It is a chamber where you put your clothes to wash in which the pressure is dropped to less than half an atmosphere. The water inside the bacterial cell boils, eventually breaks down the cell wall and deprived of its water, the bacteria dies (just like if you were deprived of the water contained in your body). The good thing is that the bad smell on your dirty clothes comes mostly from bacterial byproducts. No bacteria, no smell, happy crew.

This machine is perfectly fit for a space journey and for planetary exploration. It does not require water, or chemicals. The low pressure required for this machine to work is found on Mars where the atmospheric pressure is 6 mbar. In space vacuum is an unlimited resource. -- Alex

Here's the vacuum washing machine in action minus a pair of socks I missed.

Outside there is thunder and lightning and heavy rain. The desert floor is on the move as it turns to pink mud There was a wild tornado in Utah somewhere today causing havoc. Our crew member, storm chaser and geologist Paul Knightly is elated. He grabs his tripod and heads out into the night. Inside, I am more concerned with the sound of an occasional drip which might indicate a leak.

Annalea Beattie is an artist and writer based in Melbourne, Australia, and her art practice is based on space science. She is a member of The Mars Society's Mars 160 Twin Desert-Arctic Analog simulation, where her art-based research explores how observation is key to the role of all field geologists, including those on a planetary exploration crew. Follow The Mars Society on Twitter at @TheMarsSociety and on Facebook. Original article on Space.com.