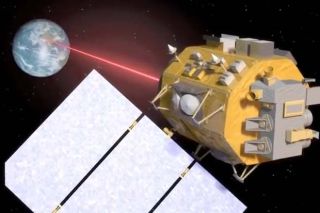 The spacecraft of the future will use lasers instead of radio waves to send data back to Earth, NASA believes.
(Image: © NASA/GSFC)

In NASA's eyes, a record-breaking laser-communications test in 2013 was just the beginning.

In 2019, the space agency plans to launch a mission that will extend upon the progress made during that 2013 trial, which was performed by NASA's LADEE (Lunar Atmosphere and Dust Environment Explorer) spacecraft.

LADEE's Lunar Laser Communications Demonstration (LLCD) experiment sent data from Earth to the moon at 622 megabits per second, far exceeding what would have been possible with traditional radio communications. While LADEE's laser showed the feasibility of the technology in space, the mission was designed to be short-lived; LADEE crashed into the lunar surface as planned just a few months after arriving at the moon. [Laser Communications Could Be 100X Faster (Video)]

The 2019 mission, called the Laser Communications Relay Demonstration (LCRD), will operate much closer to home, on the International Space Station (ISS). LCRD will practice sending communications from Earth orbit to two dedicated ground stations in Hawaii and California.

If all goes well, NASA plans to implement lasers in future communication relay satellites that work similarly to the existing Tracking and Data Relay Satellites, which ferry information from the ISS and other spacecraft to Earth. This would expand the amount of data the ISS can send back home, especially from its scientific investigations, NASA officials said.

In a NASA statement, LCRD principal investigator Dave Israel said radio communications have been used since the space age started nearly 60 years ago. Laser communications, he added, are much newer and require more practice.

"LCRD will allow us to test the performance over all different weather conditions and times of day and [help us] learn how to make the most of laser comm," said Israel, the exploration and space communications architect at NASA's Goddard Space Flight Center in Greenbelt, Maryland.

While Goddard works on laser communications from 250 miles (400 kilometers) away in Earth orbit, other branches of the agency are looking at putting lasers into deep space. If lasers were used on these missions, they would greatly expand the amount of data sent back from Mars or other locations per unit time, thereby increasing the missions' science potential.

NASA's Glenn Research Center in Ohio plans a Mars satellite experiment called Integrated Radio and Optical Communications (iROC), which could receive information from more distant spacecraft and relay these data back to Earth. The system would also be equipped with radio frequency capability to send back data from older spacecraft, such as NASA's venerable Voyager probes, which launched in 1977 to perform an unprecedented "grand tour" of the solar system's outer planets.

The agency's Jet Propulsion Laboratory in California has a concept called Deep Space Optical Communications, which is studying how lasers can increase data rates and make it easier to meet spacecraft space and power restrictions — especially for spacecraft operating at lower solar power far away from the sun.

The laser system on NASA's Lunar Reconnaissance Orbiter, for example, is half as massive and uses just a quarter of the power of the traditional radio frequency system it also carries. Lasers could also be useful on missions employing tiny cubesats, which have severe restrictions on power and mass due to their small size, agency officials said.

Laser reflectors were also placed on the moon during the U.S. Apollo and the Soviet Union's Lunokhod programs in the 1960s and 1970s. Even today, engineers can measure the distance of the moon to an accuracy of a few millimeters, just by timing how long it takes light to bounce off the reflectors and come back to Earth.

"This application is used on numerous NASA missions, such as ICESat-2, which will measure the altitude of the ice surface in the Antarctic and Greenland regions," NASA officials said in the same statement. "It will provide important information regarding climate and the health of Earth’s polar regions."