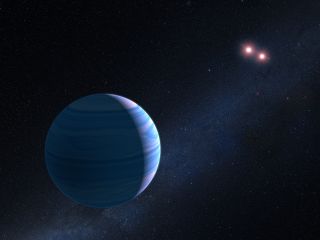 Imagine looking up and seeing more than one sun in the sky. Astronomers have done just that, announcing today (Sept. 22) that they have spotted a planet orbiting two stars instead of one, as previously thought, using the Hubble Space Telescope.

Several planets that revolve around two, three or more stars are known to exist. But this is the first time astronomers have confirmed such a discovery of a so-called "circumbinary planet" by observing a natural phenomenon called gravitational microlensing, or the bending of light caused by strong gravity around objects in space. You can see how researchers found the planet in this video.

In binary-star systems, the two stars orbit a common center of mass. When one star passes in front of the other from our perspective on Earth, gravity from the closer star bends and magnifies the light coming from the star in the background. Astronomers can study this distorted light to find clues about the star in the foreground and any potential planets orbiting the star system.

The exoplanet in this study, named OGLE-2007-BLG-349, is located 8,000 light-years from Earth toward the center of the Milky Way. It was first spotted in 2007 by ground-based observations from telescopes around the world. At first, astronomers identified the system as a planet orbiting one star. Their data suggested that there was a third object, too, but the researchers weren't able to identify it at the time.

To get a better view, the team decided to use the Hubble Space Telescope, because space telescopes take better photos of deep space than land-based telescopes. Hubble's high-resolution images revealed that the system has the brightness expected of two closely orbiting red dwarf stars.

A two-planet, single-star model is not possible in this scenario, "because a two-planet model with a main sequence host would appear to be too bright to match the [Hubble Space Telescope] data, while a two-planet system orbiting a white dwarf would be too faint," the study's authors wrote in The Astronomical Journal.

"So, the model with two stars and one planet is the only one consistent with the Hubble data," Bennett said in the same statement. With Hubble now shown to be useful for identifying circumbinary exoplanets, the space telescope could become an important resource in the search for exoplanets.