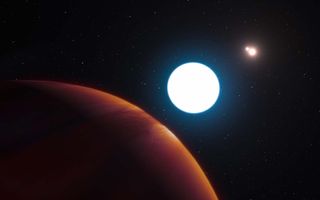 Artist's illustration of the planet HD 131399Ab, which lies in a triple-star system about 340 light-years from Earth in the constellation of Centaurus.
(Image: © ESO/L. Calçada)

A strange alien world with three suns in its sky has just been discovered, but it didn't break any records.

There are a handful of other known exoplanets with three host stars, and quite a few out there with two suns. (This latter group is sometimes nicknamed "Tatooine" planets, after Luke Skywalker's home world in the "Star Wars" films.)

Where does all this multistar madness end? Is it possible for alien planets to have four, five, six or even more suns? [The Strangest Alien Planets (Gallery)]

"It all depends on the hierarchy," said Kaitlin Kratter, a computational astrophysicist at the University of Arizona, who was part of the team that discovered the new three-sun planet, called HD 131399Ab.

Such worlds can get tugged hither and yon by a host of different gravitational interactions.

"It becomes more complicated to keep everything together," said Thomas Beatty, a postdoctoral astronomy researcher at Pennsylvania State University. "Having these orbits work is like trying to balance something on a pole. You're having to keep it together. It's a balance between the gravity from the star and whatever is orbiting and trying to shoot off, and having a third star in the system that is tugging in that balance and pushing on the pole."

What allows HD 131399Ab to weather such chaos, Kratter said, is its location. The planet orbits about 80 astronomical units (AU) from its "main" parent star, and 300 AU from the other two stars in the system, which are composed of a binary pair. (One AU is the average distance from Earth to the sun — about 93 million miles, or 150 million kilometers.)

Other known three-sun planets also lie far away from the binary stars in the system. For example, a world called KELT-4Ab is so close to its primary star that one orbit takes just three Earth days. But the planet is 330 AU from the binary stars — about eight times the average distance between Pluto and the sun in our own solar system.

"These discoveries are not really that surprising. As long as the remaining stars in the system are far enough [away] not to disturb gravitationally the orbit of a planet in a significant way (or disturb a protoplanetary disk earlier in the evolution), such planets will form and survive," said Maciej Konacki, a Polish astronomer who in 2005 reported a possible three-star planet called HD 188753 Ab. (This world didn't show up in afollow-up study by another team in 2007, leading some astronomers to conclude it probably doesn't exist.)

"HD 131399 is close to the limit where the influence of the stellar companions would be sufficient to destabilize the orbit of the planet," Konacki added in an email to Space.com. "A planet like this might subsequently be ejected from the system and end up as a free-floating planet. These triple (or multiple) star systems might be one of the natural sources of free-floating planets."

One key question to consider is how multisun planets get wedged into their orbits in the first place, researchers say.

The answers are seldom straightforward, as the case of HD 131399Ab shows. The planet is huge, at least four times the size of Jupiter. It's unclear if there would be enough gas to form such a giant world out at 80 AU from the main star in the system. Also, radiation from the binary pair would have blown much of this material into space, making the accretion process even more difficult, researchers have said.

Another possibility is that the planet formed independently in the large molecular cloud that birthed the three stars, rather than from the disk of leftover material surrounding the main star.

"In this case, we would think of the system more like a quadruple-star system, where one of the objects just happens to have very little mass," Kratter said. "Making an object so small would be very rare, however."

The final theory is that the planet formed very close to its parent star, along with a companion planet or two. Over time, the planets' orbits would have tugged at each other, and eventually such interactions booted HD 131399Ab out to its current location.

As for the other planet or planets in this last scenario — if they were close enough to the parent star, they could still be hiding there in its glare, Kratter said. And the orbits in this system may still be evolving, given that it is so young (about 16 million years old; our own solar system, for comparison, is about 4.6 billion years old). [Tatooine-Like System Found: Two Planets, Two Stars (Video)]

Planets may also be pushed around by gravitational tugs from the stars in their system, said Beatty, the second author of the paper announcing KELT-4Ab. Most systems with close-orbiting "hot Jupiter" planets have two or three stars in them, he noted; hot Jupiters may therefore form farther out in the system, and then get dragged inward by these stars' gravity.

Depending on where a star is located in the Milky Way, it may be able to hang onto multiple other stars gravitationally over quite large distances. As stars grow farther apart, they are subject to gravitational interference from other stars, from mysterious dark matter, and even from the black hole at the center of the Milky Way.

Theoretically, the limit beyond which stars come unbound from each other appears to be somewhere between 10,000 and 100,000 AU, Kratter said.

This means that a single-star system could stretch across thousands of AU, perhaps peppered with multiple binary stars and associated planets. Kratter said. As an example, she cited PH1, a planet with two suns that lives in a four-star system.

"Think about Jupiter in our own solar system," she said, explaining that Jupiter has dozens of moons tightly orbiting the planet. These moons don't interfere with the orbit of Earth's moon, for example, because they are so far away from us. Also, the sun's gravity does not fling the moons away from Jupiter, because there is enough distance between the sun and Jupiter.

The same could also be true of planets and stars, Kratter said. As long as there is enough separation between the stars, she said, it's hard to put an upper limit on how many stars could exist in one system.

Konacki agreed with this assessment.