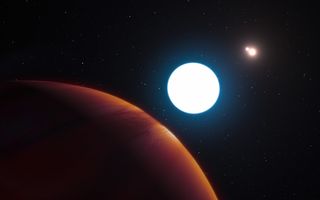 A new planet, HD 131399Ab, in a triple star system was recently discovered about 340 light-years from Earth in the constellation of Centaurus.
(Image: © ESO/L. Calçada)

A newly discovered planet has been spotted orbiting three stars at once, in a highly exotic celestial arrangement.

"The planet is orbiting star A — the lonely star in this scenario," Kevin Wagner, a first-year doctoral student at the University of Arizona, told Space.com. The planet and star A are then orbited by a pair of stars that the scientists call "star B" and "star C. (Check below to see a video of the system's orbital dance).

The strange new world, HD 131399Ab, lies 340 light-years from Earth, in the constellation Centaurus. For about half of its orbit through the system, all three stars are visible in the sky. [The Strangest Alien Planets (Gallery)]

What would the three stars look like to someone on HD 131399Ab? Some rough calculations by the Space.com staff show that all three stars would be similar in brightness to the full moon seen on Earth.

In the case of HD 131399Ab, star A is much larger and brighter than the sun — about 80 percent more massive and 7.8 times more luminous. But the planet orbits the star at a distance of about 82 astronomical units (one astronomical unit is the distance from the Earth to the sun, 93 million miles, or 150 million kilometers), which is about twice the average distance from the sun to Pluto. The increased distance means the star would appear only about 0.00116 times as bright to an observer on HD 131399Ab as the sun appears to us on Earth. But the star would still appear about 464 times as bright as the full moon appears from Earth, meaning it would still be a dominant presence in the sky.

Another comparison: On the surface of Pluto, the sun at high noon delivers about as much light as the Earth gets just after sunset. On HD 1313388Ab, star A would deliver about twice that much light.

"For about half of the planet's orbit, which lasts 550 Earth-years, three stars are visible in the sky, the fainter two always much closer together, and changing in apparent separation from the brightest star throughout the year," Wagner said in the statement. "For much of the planet's year, the [three] stars appear close together, giving it a familiar nightside and dayside with a unique triple sunset and sunrise each day. As the planet orbits and the stars grow farther apart each day, they reach a point where the setting of one coincides with the rising of [the other two] — at which point the planet is in near-constant daytime for about one-quarter of its orbit, or roughly 140 Earth-years."

Another aspect of the triple-star system that has surprised scientists is how large the planet's orbit is around star A — it's the widest orbit of a planet ever found in a triple-star system, Wagner told Space.com. What's more, stars B and C orbit so close to star A that their gravity is "very significant for the planet," Wagner said. In other triple-star systems, the planet orbits very close to one star and much, much farther away from the other two, he said.

"This [triple-star system] is the first one that we have ever found that looks like this," Wagner told Space.com. "It tells us that planets can exist in these much more exotic configurations, in multiple star systems, than many would have thought possible."

HD 131399Ab was discovered using a technique called direct imaging, in which light from the planet is seen directly by a telescope, as opposed to other planet-hunting techniques that look for planets through indirect means.

Using an advanced, direct imaging tool known as the Spectro-Polarimetric High-Contrast Exoplanet Research Instrument (SPHERE), astronomers found that the planet is about 1,070 degrees Fahrenheit (580 degrees Celsius) and weighs an estimated four Jupiter masses, making it one of the coldest and least massive directly imaged exoplanets. The researchers also found water and methane in its atmosphere.

SPHERE is an instrument mounted on the European Southern Observatory's Very Large Telescope in the Atacama Desert, in Chile. SPHERE is sensitive to infrared light, meaning it is able to detect heat signatures of otherwise hidden exoplanets. The instrument uses a technique called specialized adaptive optics to boost the contrast of its images, which, in turn, corrects the blurring effects of Earth's atmosphere and blocks unwanted starlight, explained Wagner, who is the first author of the new study.

"HD 131399Ab is one of the few exoplanets that have been directly imaged, and it's the first one in such an interesting dynamical configuration," Daniel Apai, an assistant professor of Astronomy and Planetary Sciences at UA, said in a statement.

At an estimated 16 million years old, HD 131399Ab is also one of the youngest exoplanets found to date, according to the research paper published today (July 7) in the journal Science.

How to make a triple-star system

Although the study's researchers have determined the system formed in the classical star formation scenario, which starts with a giant molecular cloud that collapses under its own gravity, much of the planet's origins remain a mystery.

"One possible scenario is that it formed in the disk that would have been around star A, after the formation of the system," Wagner told Space.com.

However, at about twice the distance Pluto is from the sun of our solar system, there would not have been very much material available for a planet to form.

"So, we think that the planet actually formed closer to one of the stars. Then, through some scattering or migration, the planet found its way to its present orbit," Wagner said.

Next, researchers plan to examine the planet's movement and trajectory, in order to determine the long-term stability of the system.

"We think that it's stable, but we can't really say for sure," Wagner said. "An unstable orbit would typically have adjusted over a few orbits of the planet. The system itself is 16 million years old, so it would have had plenty of time for the planet to adjust if it were in an unstable orbit. Still, 16 million years is rather young, so it wouldn't be extremely surprising if it were on an unstable orbit. Right now, we can't really tell for sure, because we only have one snapshot of where the planet is in orbit, and it takes over 500 years to complete."