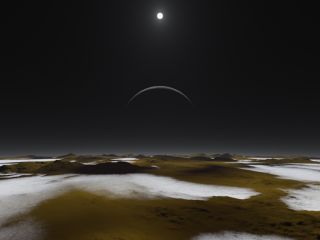 This artist's impression depicts Pluto's surface. The sun appears roughly 1,000 times fainter than it does on to us on Earth. Pluto's moon Charon hangs in the sky. Image released June 8, 2015.
(Image: © NASA/Southwest Research Institute/Alex Parker)

A new NASA Web tool called "Pluto Time" allows people around the world to experience the light levels that prevail at noon on the dwarf planet.

Users enter their location, and Pluto Time tells them the next available opportunity to go outside and see what midday Plutonian rays would look like. (Everyone has two chances each day, around dusk and dawn.)

NASA is also encouraging users of the tool to take photos during their local Pluto Time and share the images via social media with the hashtag #PlutoTime.

"We'll highlight some of the most interesting shots from around the world," NASA officials wrote on the Pluto Time site, which walks people through use of the tool.

Pluto orbits about 3 billion miles (4.8 billion kilometers) from the sun on average — very far away, but not so distant that the dwarf planet is immersed in continuous darkness.

To an observer on Pluto's surface, the sun would be about 1,000 times dimmer than it is here on Earth, NASA officials said. At noon, the sunlight would be strong enough for you to read a book, they added. (Though it might be hard to keep your eyes from straying upward to take in the exotic Pluto sky, with the big moon Charon looming just overhead.)

It will soon be "Pluto Time" in another sense: On July 14, NASA's New Horizons spacecraft will make the first-ever flyby of the dwarf planet, zooming within 7,800 miles (12,500 km) of its frigid surface.

The encounter will give scientists their first up-close looks at Pluto, resolving it from a fuzzy blob into a richly textured world and revealing insights about the mysterious object's composition, structure and evolutionary history.

"After the historic flyby on July 14, 2015, we'll combine as many submitted images as we can into a mosaic image of Pluto and its moons," NASA officials wrote on the Pluto Time page. (Pluto has five known moons, four of which are tiny; at 750 miles [1,200 km] across, Charon is about half as wide as the dwarf planet itself.)