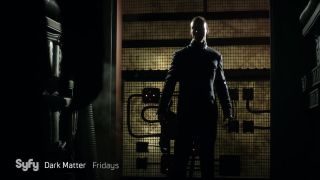 A still from the season finale of Syfy's "Dark Matter," which will return for season 3 in the fall.
(Image: © SyFy)

A new, exclusive clip from the Syfy TV show Dark Matter's season finale shows the character Three running into an old antagonist from last season. The clip was released to Space.com amid news that Dark Matter and the show Killjoys, also on Syfy, were recently renewed for third seasons.

The clip from the Sept. 16 (Friday) finale shows Three in a hallway, confronting a person clenching a wrench. Three jokes the man is "a little overdressed for a mechanic" before turning around and seeing a second man with a crowbar. The two men beat Three.

As he lies on the ground groaning, Commander Nieman — who has an old dispute with Three's crew over a mining colony — appears and squats over Three.

"We know about your plot to bomb the station, and we're going to stop you," Three gasps.

Dark Matter is now wrapping up its second season after its mysterious plot began in 2015. In the series opener, six people found themselves on a starship with no memory of their identities.

After naming each other in the order that they woke up — from "One" through "Six" — they each embarked on a quest to find out more about their pasts. Gradually, they have found more details about their identities and personalities, but many mysteries still remain.