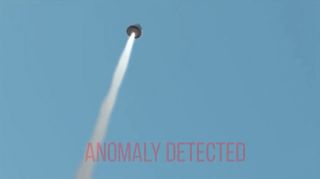 The private spaceflight company Blue Origin plans to launch a crucial abort test of its New Shepard suborbital vehicle next month, and you can get a sneak peek at the action in a new video animation.

Blue Origin, which is run by billionaire Amazon.com founder Jeff Bezos, plans to see how the New Shepard system would respond to a launch emergency during the uncrewed test, which Bezos said should happen in the first half of October. The new Blue Origin abort video shows viewers how that abort system works.

"A solid rocket motor fires for 2 seconds, quickly separating the crew capsule away from the booster," the video's narrator says. "Once away, the capsule enters a standard descent profile, deploying drogue and main parachutes before coasting down to a landing."

The New Shepard suborbital spaceflight system consists of a rocket and capsule, both of which are reusable. Indeed, the same New Shepard booster has launched and landed during uncrewed test flights four times since November 2015.

That identical booster will take to the air again for the abort test — but it probably won't survive the ordeal, Bezos said.

"The booster was never designed to survive an in-flight escape," Bezos wrote in a Sept. 8 email update. "The capsule escape motor will slam the booster with 70,000 pounds of off-axis force delivered by searing-hot exhaust. The aerodynamic shape of the vehicle quickly changes from leading with the capsule to leading with the ring fin, and this all happens at maximum dynamic pressure."

Blue Origin is developing New Shepard to fly paying customers and scientific experiments on brief jaunts to space. On Monday (Sept. 12), Bezos announced that the company also plans to build a heavy-lift rocket called New Glenn, which will launch payloads and people to Earth orbit and beyond.