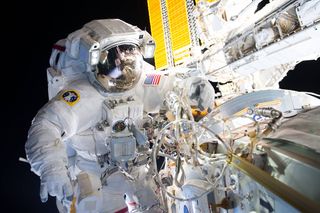 Two NASA astronauts will take a spacewalk outside the International Space Station this morning (Sept. 1) and try to retract a radiator that proved troublesome for the last team that attempted to fold it up.

Expedition 48 Commander Jeff Williams and flight engineer Kate Rubins will exit the space station from the Quest Airlock at 8:10 a.m. EDT (1210 GMT), NASA officials said during a news briefing. The spacewalk is expected to take 6.5 hours and you can watch it live here on Space.com, courtesy of NASA TV.

This will be Williams' and Rubins' second spacewalk together. Last week, the team installed the first International Docking Adapter, which will allow private space taxis to link up with the station on future missions. [The Most Memorable Spacewalks in History (Photo Gallery)]

"Looking back at the last EVA, these guys [Williams and Rubins] both performed an outstanding job. [It] was Kate's first EVA as a rookie, but you certainly wouldn't have known it," Zebulon (Zeb) Scoville, NASA lead flight director, said at the news briefing Aug. 24. "Their combination of athleticism and problem-solving really, in my mind, is a perfect blend of Michael Phelps, Simone Biles and Mark Watney."

The primary object of today's spacewalk is to retract a thermal control radiator that is no longer in use. When fully extended, the radiator is susceptible to orbital debris that could cause damage.

"It is one of our high-priority spares," Scoville said. "We really want to be able to get it retracted and covered up so that we can count on it in the future, should the need arise."

If Williams and Rubins are successful in retracting the radiator this time, they will deploy a thermal cover to fully protect the piece of equipment. Next, they will move forward with installing at least one high-definition camera onto the station's exterior.

This camera will be used to take high-resolution imagery of space vehicles that dock with the space station, so that NASA can carefully inspect the vehicles and ensure the crew's safe return home. The cameras will also provide images of Earth and be able to inspect other aspects of the space station. A total of three new cameras are expected to be installed on the station's exterior; however, only one installation is scheduled for today. A second camera will be ready for Williams and Rubins if they find themselves with extra time for get-ahead tasks.

Additional routine maintenance tasks are also planned, including inspecting a joint on the exterior of the space station to make sure that it is still in good condition and lubricated. They will also tighten some struts that have been vibrating slightly.

These tasks are about "preserving and keeping our [space] vehicle in top shape for its sustained use throughout the life of the [space] station," Scoville added.

The most difficult part of this spacewalk will be retracting the thermal control radiator. Due to its large size, the two astronauts will have to coordinate their movements and work in concert to properly fold the radiator into its out-of-use position — but this shouldn't be hard for the duo, who exhibited extraordinary teamwork during their last spacewalk together.

This spacewalk will be Williams' fifth and Rubins' second. The two NASA astronauts are part of a six-member space station crew. They arrived at the station July 9, and are joined by Japanese astronaut Takuya Onishi and Russian cosmonauts Oleg Skripochka, Alexey Ovchinin and Anatoly Ivanishin.

Last week, Williams broke the American record for most cumulative days in space. He is set to return home Sept. 6 with Skripochka and Ovchinin.

Visit Space.com later today for complete coverage of the spacewalk and a final wrap-up of the day's orbital activities.