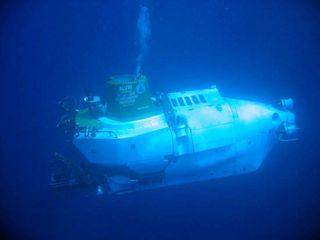 A scientist in one of the deepest places on Earth connected with an astronaut in one of the highest Friday to chat about similarities and differences in their jobs and to field questions from the public.

"Greetings Alvin, this is the International Space Station Alpha, flying about 250 miles above the Earth's surface," Williams began.

During their approximately 15-minute conversation, the pair answered questions from students, educators and the public.

One questions was about what alien life forms each had seen so far in their separate environments.

"We haven't seen anything up here, but I'm sure you've seen stuff that looks pretty weird down there," Williams said.

"Yes, absolutely Suni," said Shank, a researcher with the Woods Hold Oceanographic Institution (WHOI). "Some of the life forms down here...I think of as being aliens."

Despite the many differences in their research-Shank works in a murky aquatic environment, beyond the reach of the Sun, whereas Williams sees 15 sunrises a day-the two found some common ground.

"We're both living life in the extremes," Shank said.

At times, the two showed signs of "status" envy.

"Hey, what do you think about switching jobs?" Williams asked. "I'd love to do your job and see what's living on the ocean floor. How about coming up here sometime?"

"I would love to do that," Shank said.

Astronauts aboard the ISS frequently make orbital calls back home to share their experiences with people on Earth. The ISS crew also recently talked to Martha Stewart about how to make their orbital laboratory seem a bit more like home.