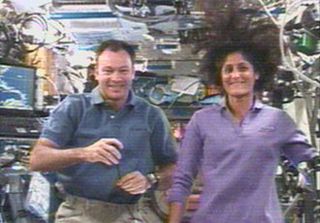 Astronautsaboard the InternationalSpace Station (ISS) sought a few pointers from domestic diva Martha StewartMonday on how best to make their orbital laboratory a bit more like home.

“It’sreally an honor and a privilege to be up here,” NASA astronaut SunitaWilliams, an Expedition 14flight engineer aboard the ISS, told Stewart during a Monday chat via videolink broadcast on NASA TV [image].“But if you’ve got any tips on how we could fix up the place of make somebetter meals, we’re welcome to that.”

Williamsand Expedition 14 commander MichaelLopez-Alegria, of NASA, spoke with Stewart during a taping of hertelevision show, which will air at a later date, NASA officials said. Also living aboardthe ISS with the NASA spaceflyers is Russian cosmonaut and flight engineer MikhailTyurin.

“I am sohappy that all of you are doing so very, very well and that you are helping uslearn so much about space travel,” Stewart told the station astronauts. “It is something that Ithink all of us here in the audience would love to do at some point. Going on azero gravityflight really is a good way to start.”

Stewart,who experienced a brief taste of weightlessness during a Zero G flight lastyear, discussed everything from food to science to laundry with Williams andLopez-Alegria to get a sense of life in Earth orbit [image].

Nobody,Lopez Alegria replied, adding that a pair shorts lasts for about a month, whileshirts typically last one week and under clothes for a few days before they’repacked away in the trash. Lopez-Alegria confessed that he’s also lost about 10pounds (4.5 kilograms) since he first arrived aboard the space station lastSeptember.

“It’s agood place to come if you’re on a diet,” Lopez-Alegria said.

Stewartsaid she has been helping her friend CharlesSimonyi – a U.S. entrepreneur poised to launch alongside the station’s new Expedition15 crew on April 9 as the fifth touristto orbital laboratory – pick out Russian meals for his spaceflight. Simonyi - who is paying somewhere betwen $20-to-25 million to visit the ISS under a deal brokered by the Virginia-based firm Space Adventures - isalso planning to haul up a food banquet for his orbital hosts, Stewartadded.

“We verymuch look forward to visits from other crews because they invariable bring someinteresting food,” Lopez-Alegria said.

The recentarrival of an unmannedRussian cargo ship, which dockedat the ISS on Friday, brought fresh pickles, though they came with a twist, theExpedition 14 crew added [image].

“That wasquite a treat, though it was a little bit difficult to figure out how to eatthem,” said Williams, adding that the pickles were immersed in liquid that hadto be consumed first to get the snacks out their packet without causing a mess.

The ISSastronauts discussed some of their science experiments – including Williams’work to grow soy beans that Stewart assured were quite nutritious if givenenough light – that help researchers prepare astronauts for future missions tothe Moon or Mars.

Williams’sister Dina, who is caring the astronaut’s beloved Jack Russell terrier Gorby and also participated in the ISS call with Stewart, pledgedto send a care package to her space-bound sibling during the six-monthExpedition 14 mission.

“If shecould wrap Gorby up and send him up here, that’s great,” Williams said.