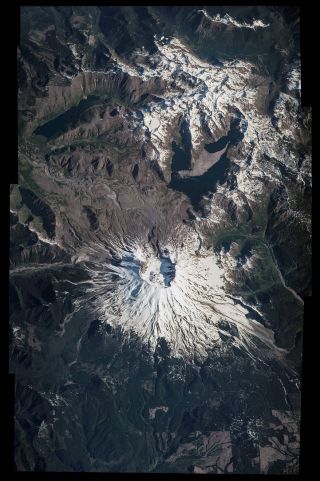 America's national parks offer some of the most incredible views of beautiful landscapes here on Earth — so imagine what these spectacular scenes look like from space.

NASA astronaut Jeff Williams, commander of Expedition 48, has a unique vantage point of Earth from the International Space Station (ISS), where he has captured many photos of the deep trails of the Grand Canyon in Arizona; the high peak of Denali (also known as Mount McKinley) in Alaska; and the dry, barren landscapes of Death Valley in California.

To celebrate the 100th anniversary of the National Park Service, Williams has been sharing his photos from the ISS and his memories of visiting America's national parks as a child. Williams recorded this awesome video showing his view of national parks from space as part of that celebration.  You can see all of his space portraits of U.S. national parks here.

"Many of the large-scale parks are easily seen from the space station — their rugged beauty and unspoiled terrains reveal a geographical landscape as diverse as America itself," Williams said in his video. "And the smaller parks, often unseen from space, are every bit as significant and crucial to the overall landscape and timescale of American history and culture."

Williams' love for national parks began when he was a child. His father was a high school history teacher and seasonal park ranger for the National Park Service. Every summer, his family would move from Wisconsin to Wyoming, where is dad serviced Devils Tower National Monument.

This gave Williams and his family the opportunity to travel to many national parks, including the Badlands of South Dakota; Montana's Glacier National Park; and Yellowstone, the world's first national park. And now, as a NASA astronaut, Williams gets to explore the same national parks from space.

From the space station, Williams has had the opportunity to photograph Denali National Park; the extensive Grand Canyon network, which is 18 miles (29 kilometers) wide, 1 mile (1.6 km) deep and 277 miles (446 km) long; and Mount St. Helens National Volcanic Monument in Washington, where the iconic volcano erupted in 1980.

"The National Park system reveals some of the very best that America has to offer and reflects the democracy under which it was developed," Williams said. "In many ways, it is the centerpiece of Americana. From its inception 100 years ago, the National Park Service has grown from one park, poorly funded and threatened by other interests, to a vast system of protected national parks, monuments, seashores, wildlife preserves, recreational areas and historical sites spanning over 84 million acres [340,000 square kilometers]."

The National Park Service was founded 100 years ago, on Aug. 25, 1916. Since its creation, the service has protected and preserved the country's natural beauty.

"As an astronaut, one of my favorite efforts supported by the National Park Service is the night skies initiative, which focuses on preserving areas within the national parks that are devoid of artificial light, so that people may appreciate and learn about the miraculous cosmos surrounding us."

The ISS orbits Earth about every 90 minutes, which means that the space station goes around the planet about 16 times each day, giving Williams a unique opportunity to capture America's national parks. Some other parks Williams has photographed from space include the Everglades in Florida, Crater Lake in Oregon and the Rocky Mountains in Colorado.