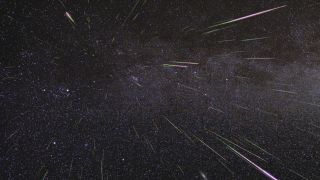 The Perseids, the most widely observed and dependable of the annual meteor displays, will peak during the overnight hours of Thursday, Aug. 11 into the morning of Friday, Aug. 12, and this year has all the earmarks of being a spectacular show.

First, there is the situation regarding the moon. At first glance, it appears that the viewing conditions aren't very good, as the peak night coincides with a waxing gibbous moon, 63-percent illuminated. Its bright light no doubt will wash out all but the very brightest of these swift streaks, which chiefly will emanate from out of the northeast part of the sky. However, there is some very good news: Early Friday morning (Aug. 12), the moon will set near 1:00 a.m. local time. Dawn breaks at about 4:20 a.m. around the mid-northern latitudes. Between those two times, there will be a nearly 3.5-hour "window" during which the sky will be totally dark.

Another reason the Perseids could put on a better-than-average show this year is a gravitational assist from Jupiter. [Perseid Meteor Shower 2016: When, Where & How to See It]

Most meteor showers evolve from comets. The cometary parent of the Perseids is a comet known as Swift-Tuttle. This comet takes approximately 130 years to make one trip around the sun. It was discovered in 1862 and last appeared in our skies in 1992. (It's due back in 2126.) Comets are composed chiefly of frozen gases, and meteoroids that are mixed in with that gas — the bits and pieces that have flaked off from the comet's solid center or nucleus.

Like all comets, Swift-Tuttle leaves behind streams of tiny particles ranging in size from large grains of sand to small pebbles, but with the consistency of cigar ash. They're invisible to people on Earth until, upon entering our atmosphere with immense velocity — 37 miles per second (60 kilometers per second) — they blaze up within the span of a heartbeat and streak across the sky in a brief, blazing finale. Comet Swift-Tuttle probably has passed the sun hundreds of times to produce the present stream of Perseid meteors.

The meteoroids have become distributed all around the comet's elongated elliptical orbit, which takes them out beyond the realms of Pluto and ultimately brings them back to intersect Earth's orbit at almost a right angle, producing a fairly predictable meteor display that lasts for several days in mid-August.

The Perseids intersect the orbit of Earth more or less directly, but on their way in toward the sun, they also pass other planets. In the case of the most massive planet in the solar system, Jupiter, there is no direct encounter; the dross of Comet Swift-Tuttle passes well above this giant world, never coming any closer than about 160 million miles (257 million km) at 11.8-Earth-year intervals — the time it takes for Jupiter to make a complete orbit around the sun.

But on those occasions when it's passing closest to Swift-Tuttle's trail of debris, Jupiter's powerful gravitational field can still slightly perturb the comet particles just enough to nudge them about 930,000 miles (1.5 million km) closer to Earth. The result is usually a noticeably brighter and stronger Perseid display, producing more than the usual complement of meteors.

Most years when the Earth encounters the Perseids, observers in areas where the sky is very dark and clear might count as many as 60 to 90 meteors per hour. (But here's a necessary disclaimer: If you live in an area where haze, smoke and bright city lights proliferate, or tall obstructions block large areas of the sky, you will likely see a lot fewer.)

As it turns out, Jupiter recently passed closest to the orbit of Comet Swift Tuttle in November 2014. But an additional 22 months must then pass for the meteoroid zone affected by Jupiter to arrive in the vicinity of Earth. That indicates that the 2016 Perseids could be another "prime year" for the Perseids; they could indeed prove to be unusually numerous. [Top 10 Perseid Meteor Shower Facts]

What do the Perseid pundits say?

In the 2016 edition of the "Observer's Handbook" of the Royal Astronomical Society of Canada, Margaret Campbell-Brown and Peter Brown noted that, "Some models predict an enhancement in activity from the Perseids in 2016 about 7 hours before the traditional peak, but this is from older trails unlikely to produce more than a moderate increase in rates." On their table of meteor showers for 2016, they highlighted the Perseids in bolddue to the possibility of this outburst.

The outburst in question is being forecast by French meteor expert Jeremie Vaubaillon. It shows the Earth moving along in its orbit and encountering a small, albeit concentrated, zone of comet material at around 1 a.m. EDT (0500 GMT) on Aug. 12 that would favor the eastern portions of the U.S. and Canada. But Vaubaillon is cautious. "This trail of material dates is over nine centuries old, making the forecast for a possible outburst less certain," he told me in an email. "Certainly I would look for it, but just keep in mind the uncertainties."

You can see a map charting that interaction here:

Another noted meteor expert, Mikhail Maslov of Russia, forecasts higher-than-normal Perseid meteor rates: "In 2016, Jupiter will cause a significant increase up to 160-180 meteors per hour. Earth will encounter the perturbed part of the Perseid stream, which was shifted closer to the Earth's orbit by Jupiter's gravitation. This means we have to expect heightened Perseid activity." His complete description, including more technical details, can be found here: http://feraj.narod.ru/Radiants/Predictions/Perseids2016eng.html

This year is an auspicious occasion for me, as it marks the 50th summer in which I have watched out for the Perseids. What I (and others) have noted over the years is what some have called the "clumping effect" — that the Perseids appear to come in rapid succession; several or more within a minute or two, followed by a lull of several minutes before the sky suddenly bears fruit once again. Interestingly, while many observers have stated that the Perseids seem to come in bunches, when hourly Perseid observations have been carefully examined using the Poisson distribution formula (explained in statistics textbooks), it has been determined that, more often than not, a random distribution of arrival times has been inferred. Therefore, the "clumping" or bunches may be merely an illusion.

Have a Perseid party

Why not consider organizing a "Perseid party," and have a number of people watching different parts of the sky?

To observe the Perseids, you may need to dress warmly, bring a reclining chair and watch the sky. You need no other equipment. Find a dark observing spot, preferably with a low horizon, and look in any direction. Use this light-pollution map (http://tinyurl.com/zrk7qju) to find dark locations near you.

The Perseids get their name from their apparent radiation from the northern constellation of Perseus. At dusk, the uppermost part of this star pattern is grazing the northern horizon. Not until 11 p.m. local time is this group high enough in the northeast to be conspicuous. At 4 a.m., when Orion has risen, Perseus has reached a lofty perch and is nearly overhead; that's also when you're likely to see the most meteors.

But it is not necessary to continuously stare at Perseus itself if you are looking for these shooting stars. A Perseid may appear in any part of the sky, but its trail, if mentally traced backward, invariably leads back to Perseus.

Typically, they appear as bright, swift streaks. A few outstandingly bright meteors (fireballs) occasionally may be seen. Fainter meteors appear white or yellow; brighter ones green, orange or red. About one-third leave luminous trains, which may be spectacular and can persist for many seconds; the most outstanding meteors often end in flares or bursts (called "bolides") and are even capable of casting shadows! Those are the kind of meteors that tend to elicit screams of delight from Perseid watchers.

You can also contribute valuable observational data. If you decide to do so, use the techniques suggested by the International Meteor Organization (IMO) (http://www.imo.net/visual/major). This way, your data will be in a standard format, which can readily be used for analysis. Send your data to the IMO at http://www.imo.net/visual/report/electronic.

Editor's note: If you have an amazing photo of this year's Perseid meteor shower you'd like to share for a possible story or image gallery, please contact managing editor Tariq Malik at spacephotos@space.com.