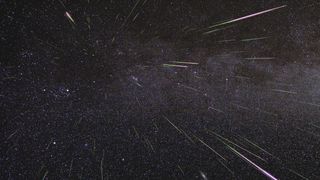 This time-lapse image, captured in August 2009, shows an outburst of Perseid meteors. The 2016 Perseid meteor shower, which peaks on the nights of Aug. 11 and Aug. 12, is expected to have more shooting stars than usual.
(Image: © NASA)

Shooting-star seekers heading out to watch the Perseid meteor shower Aug. 11 and 12 may see a much better show than in past years.

That's because the Earth will collide with more material than usual from Comet Swift-Tuttle, which is the source of the Perseids. Jupiter's gravity has tugged the debris stream in such a way that Earth will move closer to the middle of the stream, rather than the edge, NASA officials said in a statement.

In fact, Earth may collide with three or more streams during the shower this year. This could result in double the usual rate of meteors, and a spectacular rate of 200 meteors per hour under perfect conditions, according to the statement. [Perseid Meteor Shower 2016: When & How to See It]

"Here's something to think about: The meteors you'll see this year are from comet flybys that occurred hundreds if not thousands of years ago," Bill Cooke, who leads NASA's Meteoroid Environment Office in Huntsville, Alabama, said in the statement. "And they've traveled billions of miles before their kamikaze run into Earth's atmosphere."

Although the meteor shower is named after the constellation Perseus (the meteors appear to radiate from that direction), the fragments burning up in Earth's atmosphere have a much closer source: Comet Swift-Tuttle, which orbits the sun every 133 years, leaving behind a trail of tiny particles as it goes.

If you have clear skies and live in the Northern Hemisphere, head out to watch the show between midnight and dawn local time on Aug. 12 and 13 (that is, the nights of Aug. 11 and 12). Go to a dark area, and wait for 30 to 45 minutes for your eyes to adjust. Your bare eyes are all you need in order to see the meteors.