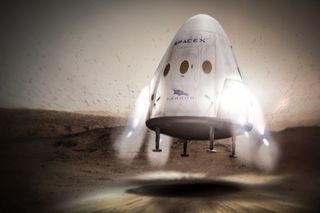 The SpaceX Red Dragon capsule could carry humans to Mars, the company has said. It's one of many projects that SpaceX team members are working on.
(Image: © SpaceX)

The private spaceflight company SpaceX is pioneering the field of reusable rockets and pursuing dreams of sending humans to Mars. Understandably, lots of people want to work there.

But how does someone get a job at SpaceX, and what's it like to work there? Brian Bjelde, vice president of human resources for the company, shed a little light on those questions yesterday (Aug. 2) during a Reddit Ask Me Anything (AMA).

The questions varied, but Bjelde mostly responded to queries about how to get an interview for a job or an internship, what kind of experience the company values in its potential hires and those rumors about all SpaceX employees having superlong workdays. [Wow! SpaceX Nails Rocket Landing at Sea Again]

One (very direct) user hit Bjelde with a question about the company's reputation (true or not) for making employees work "50+ hours/week," as well as setting "aggressive" or even "unrealistic" goals.

"As VP of HR, how have/are you working on fixing this reputation?" the user asked Bjelde.

"We recruit people who are incredibly driven by our mission, but it's a myth that most of our employees are working 100 or even 80 hour weeks on a regular basis," Bjelde responded. (So technically, that still leaves the 50- to 80-hour window unaddressed.)

"Sometimes, you have incredibly tight schedules that you need to keep, and that just goes along with launching rockets," he continued. "But we want our employees to be productive over the long term, and that means working at a pace that's sustainable. We encourage employees to pace themselves, and our managers pay close attention to whether people are driving themselves too hard for long periods. This is one of the biggest myths I hear about working at SpaceX, so I always want to knock this idea down!"

Another user asked specifically about rumors of SpaceX having high employee turnover rates.

"Our turnover rates are below average for the industry," Bjelde wrote. "We have lots of employees, like me, who have been here more than 10 years and have made a fantastic career with SpaceX! Getting to Mars is a long term mission so we seek to attract employees, and retain them, for the long term."

Bjelde got more specific about the culture at SpaceX in response to another question.

"People [at SpaceX] are really mission driven. Our goal is to help humanity become a multi-planetary species," he wrote. " We take the hardest shots. It's better to pick giant, hard to achieve goals than it is to pick easy choices. We set aggressive goals and strive to reach them. That's how we'll make the fastest progress. We try to avoid analysis paralysis in all our work. We build, test, break things and iterate with a sense of urgency."

"We try not to limit our thinking except by the limits imposed by physics," he wrote. "If someone says something can't be done, whether it's a business decision or an engineering one, they better have Einstein and Newton backing them up. Otherwise it's ripe for discussion. And we don't limit our thinking with hierarchies either. We have a pretty flat organization, and the best idea always wins – not just the idea proposed by the most senior person in the room."

Commenters in the AMA were also curious about the company's CEO, Elon Musk, who has made himself a public figure known for speaking grandly about his vision for future space exploration, as well as the need for innovation in order to solve the world's biggest problems. He's made appearances on sitcoms and late night shows, and got into Twitter scuffles with another spaceflight entrepreneur, Jeff Bezos, founder and CEO of Amazon.com as well as the private spaceflight company Blue Origin.

"I've been working with Elon for a long time, and he's awesome to work with...always impressed with how he can dig into the smallest of details and make the tough decisions," Bjelde wrote.

Multiple commenters had questions about how someone could get a job or internship with the company.

"What is the one thing, above all else, that I can do to get the interview? In other words, what does SpaceX value most in an intern candidate?" one commenter wrote.

"The one thing to do is keep applying with an updated resume and to not limit yourself to only one site or one term," Bjelde replied. "Last year we received over 39,000 applications for our internship positions and this number continues to exponentially grow! Keep putting yourself out there and your resume will get noticed."

Based on Bjelde's description, the internship program at SpaceX sounds extremely competitive, but incredibly rewarding.

"Our interns play a direct role in our mission to [Mars] – and are [given] incredibly challenging projects," he said. "During their twelve weeks, they are fully responsible and own multiple projects. They are paired with a mentor/manager to guide them, but ultimately they are responsible for delivering on their projects. This summer, one of our Production Interns was responsible for designing a tool to help align the docking system on Crew Dragon. This tool will ensure that the spacecraft docks correctly with the International Space Station and that no damage is inflicted to either craft. The tool itself aligns the latches of the soft capture mechanism on the docking system so that they all latch simultaneously to the passive system on the ISS. In the past we had an intern design the re-entry algorithm for the Dragon Spacecraft. So many great stories like this. Pretty cool stuff!"

Bjelde had a tip for one undergraduate student pursuing an aerospace engineering degree: "Get involved with as much hands-on project experience as possible. It doesn't matter what it is, as long as it is challenging and flexing your engineering muscles."

"We also have a variety of roles within SpaceX, so you can come from any background and be successful at SpaceX," he said. "When I was in college I got involved with a microsatellite team and volunteered working in a high altitude flow facility (a.k.a. vacuum chamber)....it was there I met some fantastic engineers (one referred me to my first job at SpaceX!), professors, and more."