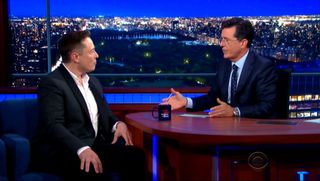 Elon Musk appeared on "The Late Show with Stephen Colbert" last night (Sept. 9) to talk about dropping nuclear bombs on Mars, the future of rocket travel, and a creepy, snakelike robot for electric-car owners.

"Are you sincerely trying to save the world?" Colbert asked Musk early in the interview, which covered a wide range of topics, including Musk's ideas about settling Mars (which he called a "fixer-upper of a planet"), and what he considered the biggest challenge of the 21st century. You can watch the full interview via CBS here.

Musk is, among other things, founder and CEO of SpaceX, a private spaceflight company that is scheduled to start transporting astronauts to the International Space Station in 2017. The entrepreneur has been a vocal advocate of not only sending humans to Mars, but of engineering the Red Planet so humans could live on its surface outside of enclosed habitats.

"Mars is a fixer-upper of a planet," Musk told Colbert. How would humans make the Red Planet easier to live on? First, by warming it up, which Musk said could be achieved either by generating greenhouse gasses to trap heat (the "slow method"), or by dropping thermonuclear weapons near the poles (the "fast method").

The pair discussed SpaceX's attempts to make reusable rockets, which Musk said would be essential for lowering the cost of spaceflight. The pair watched a clip of a Falcon 9 rocket crashing into a ship during an attempt to recover the rocket after it successfully sent a payload into space. After watching the footage, Musk said he and SpaceX are "feeling sad, but happy at the same time […] because if we could reduce the landing velocity, we could get it to land and stay upright and not explode."

"That is one of the goals of rockets," Colbert said. "Not to explode."

But the late-night talk-show host took a small break from the bantering to express great admiration for the entrepreneur.

"One of the things I like about what you do is that your vision of the future — it's very hopeful; it is … fixable," Colbert said. "In the world, there's so much despair; there's people throwing up their hands at the problems of the world that can't be solved. You think we can put our minds to it and actually make it a better place."

Musk told Colbert that the "most important thing we need to solve this century is sustainable energy." Musk is CEO of Tesla Motors (Colbert said he owns a Tesla and loves it), CEO of SpaceX and chairman of SolarCity, an energy services company that, among other things, sells solar panel systems for homes.

At one point in the interview, Musk and Colbert watched a video of a snakelike robot built by Tesla Motors that will automatically plug in a Tesla electric car in a garage. But even Musk admitted that the slithery movement of the robot is somewhat disconcerting, saying, "This looks a little wrong."

Colbert said the bot looked like "the thing that jacks into the back of Neo's head in "The Matrix." When Colbert asked, jokingly, if it would attack him in his sleep, Musk had a serious reply: "For the prototype, at least, I would recommend not dropping anything when you're near it," he said.