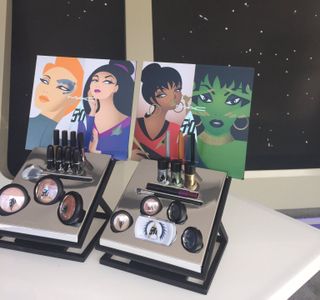 The makeup mavens at M-A-C beamed their new "Star Trek" line of cosmetics to San Diego Comic-Con this week (complete with their own transporter pad) to celebrate the 50th anniversary of the iconic science fiction franchise.

"The collection of lipsticks, powders, eye shadows, nail lacquer, eye liner, lash and brushes is inspired by Star Trek and, more specifically, Deanna Troi, Uhura, Seven of Nine and the Orion Girl, Vina," according to StarTrek.com, where you can see more photos of the M-A-C Star Trek display at SDCC 2016.

But M-A-C pulled out all the stops for their "Star Trek" line launch at SDCC 2016.

"M-A-C commissioned a huge, sectioned, spherical and very Trek-like station that features a Ten Forward area, an interactive transporter section (yes, you can beam up and down), and an engineering warp core, along with Trek music, atmospheric smoke, view screens, computer terminals and more," StarTrek.com reported.

Actors in Trek uniforms are making regular appearances at the exhibit to talk with visitors, pose for photos and – in the case of Uhura and Spock – sing a duet.

You can find more details behind the new "Star Trek" makeup line, including a talk with M-A-C senior artist and Trek fan Dominic Skinner, at StarTrek.com here.

M-A-C's "Star Trek" cosmetics will warp into stores on Sept. 1.