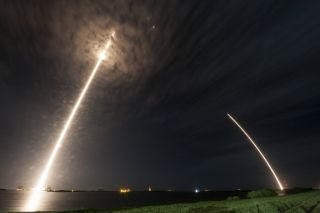 SpaceX pulled off its fifth rocket landing in the last seven months early Monday morning (July 18), this time bringing a booster back during a successful cargo launch toward the International Space Station (ISS).

About 2.5 minutes after liftoff, the Falcon 9's first stage separated and performed a series of engine burns to head back to Cape Canaveral. At 12:53 a.m. EDT (0453 GMT), the booster touched down softly a few miles south of its launch pad, eliciting a huge round of cheers from the SpaceX personnel gathered at the company's headquarters in Hawthorne, California. [Photos: SpaceX Launches Cargo Mission, Lands Rocket Again]

"It's a great day for SpaceX, a great day for NASA," Joel Montalbano, NASA’s deputy manager of ISS utilization, said during a postlaunch news conference. "The launch campaign was just fantastic to watch."

SpaceX now has five successful rocket landings to its name. The first occurred in December 2015, when a Falcon 9 first stage came back to Cape Canaveral during a commercial satellite launch. The next three — one in April and two in May — featured sea landings, on a robotic ship named "Of Course I Still Love You."

Such "droneship" landings are necessary for missions that launch payloads to distant orbits, because the rockets involved generally cannot carry enough fuel to make it all the way back to land, SpaceX representatives have said.

All of these touchdowns are part of SpaceX's effort to develop fully and rapidly reusable rockets, which company founder and CEO Elon Musk has said could dramatically reduce the cost of spaceflight. Indeed, the company plans to launch most of its landed boosters multiple times, and the first such reflight could come as early as this autumn.

But the landed rockets are piling up fast now — so fast that SpaceX might soon have to procure storage space beyond the hangar it currently uses at Cape Canaveral.

"I don't know exactly what all our options are," Hans Koenigsmann, vice president of flight reliability at SpaceX, said during a prelaunch news conference Saturday (July 16). "I know that the team is working on that, and I believe that we're looking at different hangars in the vicinity."

"It's a good problem to have, right?" he added with a laugh.

The Falcon 9 first stage that just landed should not have to take up valuable hangar space for too long, Koenigsmann said in Monday's post-launch briefing.

"From what I can see, [the rocket is] in excellent shape, and probably pretty soon ready to fly again," he said.

Dragon is on its way

The rocket landing, while dramatic and exciting, was but a secondary objective of Monday's launch. The main goal — which the Falcon 9 also achieved — was sending Dragon on its way to the orbiting lab on a cargo mission for NASA.

If all goes according to plan, Dragon will arrive at the ISS at about 7 a.m. EDT (1100 GMT) Wednesday morning (July 20), NASA officials said.

The uncrewed cargo capsule is packed with about 3,800 lbs. (1,700 kilograms) of supplies, hardware and scientific gear, including 2,050 lbs. (930 kg) of research samples. Also onboard is an instrument designed to help manage maritime traffic on Earth, said Julie Robinson, chief ISS program scientist.

"From an overall perspective, this is just part of the rich stream of research going on on the space station, from human research, biology, physical sciences investigations and things for exploration technology," Robinson said during Saturday's briefing.

Dragon is also toting a crucial docking adapter, which will allow future crewed spacecraft — including the manned version of Dragon, which is scheduled to begin flying astronauts next year — to link up with the ISS more easily, NASA officials have said.

"I know how critical this is for NASA and the ISS in general, and also of course for SpaceX going forward with Crew Dragon," Koenigsmann said. "This is a really important piece of hardware."

This is the second attempt Dragon has made to bring such an adapter to the ISS. Another one was aboard the June 2015 Dragon mission, which was lost when the Falcon 9 broke apart less than three minutes after liftoff.