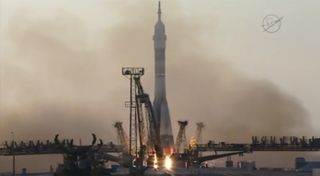 "The crew on board the Soyuz MS-01 are safely on orbit ... making their way to the International Space Station after a picture-perfect launch from a beautiful, clear day in Baikonur," NASA spokesperson Brandi Dean said during NASA TV's live broadcast.

"We are feeling fine; everything is good on board," Ivanishin reported shortly after launch, and the crew exchanged fist-bumps when the rocket's third stage detached, marking their safe arrival into orbit.

The new crewmembers are slated to stay aboard the station for about four months as part of the orbiting outpost's Expedition 48 and 49 missions. During their time in space, Rubins, Ivanishin and Onishi will help conduct more than 250 experiments in the fields of molecular and cellular biology, human physiology, fluid dynamics, materials science and physics. Some of the physics work will treat gravity as a variable, taking advantage of space's unique setting, NASA officials have said.

During a press conference in March, Rubins even mentioned hoping to try microgravity DNA-sequencing in her spare time.

Rubins is a molecular biologist and former "virus hunter"; she worked with West and Central African viruses before being selected as a NASA astronaut in 2009. Onishi, who is a trained pilot, was selected as an astronaut candidate in 2009 as well (by JAXA), and he was a part of NEEMO 15, a 2011 NASA research mission in which six "aquanauts" lived in an underwater lab testing new technologies for exploring an asteroid.

Ivanishin flew in the Russian Air Force before his selection by the Russian space agency, known as Roscosmos, in 2003, and he served as flight engineer on the long-duration Expedition 29/30 space station missions in 2011. (His last launch from Baikonur was on a snow-filled winter day).

"The hardest aspect of being in space is to fly 34 orbits around Earth," Ivanishin said during a discussion with the press in March, referring to the two-day journey before the Soyuz spacecraft finally reaches the station. A shorter flight plan, which has been available since 2013, takes just 6 hours, and four orbits around the Earth, to reach the orbiting lab. Ivanishin's previous flight to the space station was the longer journey as well.

"The first difficult thing will be to survive this journey to the International Space Station," he said. "This part of the journey will be maybe less pleasant."

The upgraded Soyuz spacecraft, which the spacefliers will test out on their journey, includes additional shielding on its habitation module, a fifth battery assembly to increase its electrical power reserves, increased efficiency and more surface area for the solar panels, a new thruster configuration and several upgrades to its communications and command systems, said Mark Bowman, chief engineer in the Soyuz branch of NASA's Astronaut Office, during a NASA TV broadcast.

The Soyuz spacecraft is scheduled to arrive at the space station and dock at 12:12 a.m. EDT (0412 GMT) on Saturday (July 9), and the hatches connecting the two vessels should open at around 2:50 a.m. EDT (0650 GMT) that day, NASA officials have said. The new crewmembers will then be greeted by the station's present inhabitants: the station's commander, NASA astronaut Jeff Williams, and Russian cosmonauts Oleg Skripochka and Alexey Ovchinin. (The arrival, hatch opening and welcome ceremony will stream live on Space.com, courtesy of NASA TV.)

And then the real work will begin.

"One of the things that's the most difficult is time," Rubins said in a video interview with Space.com last month. "There are so many exciting things to do. There are amazing experiments that you want to do. There are pictures you want to take out of the window. Just being able to fit that in, it feels like there are not quite enough hours in the day to be able to do everything we want to do aboard space station.

"We've got so much stuff to do, and it's all going to be pretty interesting and incredible," she added.