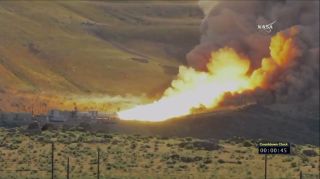 A view of the fire and smoke emerging from NASA's SLS rocket booster engine, which underwent a test firing on June 28, 2016.
(Image: © NASA TV)

Thousands of onlookers gawked as a column of flame exploded across the desert floor outside Promontory, Utah, today (June 28) during a test of the engine that will help power NASA's next-generation rocket.

Lying horizontally, the engine for NASA's Space Launch System (SLS) rocket booster released a massive blast of flame and a wall of black smoke for two solid minutes during today's Qualification Motor-2 (QM-2) test (see photos of the test here). This is the last engine test before NASA's Exploration Mission 1 (EM-1) in 2018, in which SLS will send an uncrewed Orion capsule on a flight beyond the orbit of the moon and back to Earth. Eventually, NASA aims to use Orion and SLS to send humans to Mars.

Today's test was delayed by about an hour due to a problem with the computer that controls the sequence of events during the test, NASA representatives said during the pretest broadcast on NASA TV. [Watch the Space Launch System Booster Test]

A massive crowd of spectators gathered in a viewing area, located about 1 mile (1.6 kilometers) away from the engine, to watch the 2-minute burn. Former NASA astronaut Don Thomas, who spoke with NASA TV during a live, prelaunch webcast, estimated that 5,000 to 10,000 people were present in the viewing area. Once the engine fired up, spectators saw the resulting bright light, but the explosive sound from the engine didn't reach the crowd until about 6 seconds later.

Today's QM-2 test of the SLS booster engine took place at facilities owned and operated by the private spaceflight company Orbital ATK. The company has been contracted by NASA to build the solid rocket booster that will "operate in parallel with SLS's main engines for the first two minutes of flight," according to the same NASA statement. (When it's complete, SLS will consist of a core stage with four main engines, along with two solid rocket boosters like the one that was tested today.)

The QM-2 test was preceded by a similar engine test in March 2015. The test today was a "cool" test, meaning the engine propellant was chilled to about 40 degrees Fahrenheit (4 degrees Celsius), which helps scientists "understand the effects of temperature on how the propellant burns," according to NASA's website.

SLS engineers also tested the engine's thrust vector control system, according to Bruce Tiller, the SLS booster manager at NASA's Marshall Spaceflight Center in Huntsville, Alabama. That means that viewers who watched today's event on NASA TV may have seen the engine nozzle moving slightly during the test.

"But the big thing is what you don't see," Tiller said. "And that's all the data we're going to gather and [the data] that the engineers are going to review carefully to confirm and prove that our motor is ready for flight."

"This final qualification test of the booster system shows real progress in the development of the Space Launch System," William Gerstenmaier, associate administrator for the Human Exploration and Operations Mission Directorate at NASA, said in a statement. "Seeing this test today, and experiencing the sound and feel of approximately 3.6 million pounds of thrust, helps us appreciate the progress we’re making to advance human exploration and open new frontiers for science and technology missions in deep space."

NASA's SLS rocket is designed to send spacecraft to deep-space destinations such as Mars. NASA has scheduled EM-1 for 2018; the mission will send the Orion capsule on a journey past the moon, more than a quarter million miles (400,000 km) from the Earth, according to Mike Sarafin, the mission manager for EM-1 at NASA. The Orion capsule underwent a low-orbit test flight in December 2014, but EM-1 will be the SLS' maiden voyage, Sarafin said.

"We're going to fly it and test it out in that new environment, where we're outside Earth's magnetic field and we see the environment of deep-space radiation," Sarafin said during the NASA TV pretest broadcast today. "We're trying to understand how the system performs in that environment, and we'll get all that valuable data back before we put our astronauts on the very next mission, Exploration Mission 2."

That second test of the SLS and Orion system is officially targeted for August 2021, but recently, NASA said that date may slip to 2023.