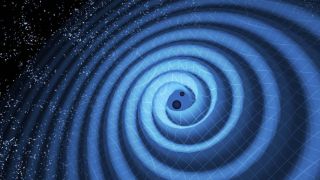 There was big news in astrophysics this week: An experiment detected ripples in space-time, known as gravitational waves, created by two black holes colliding in space 1.4 billion light-years from Earth.

That certainly sounds … complicated. But what's the big deal, exactly? Why are scientists so excited about this new discovery? What does it tell them about the universe? Let's break it down. [Hunting Gravitational Waves: The LIGO Laser Interferometer Project in Photos]

What's so cool about gravitational waves?

The first significant thing about LIGO's direct detection of gravitational waves is that it happened at all.

But first, let's back up a bit and talk about Albert Einstein. He was a smart guy — he figured out a lot of really subtle stuff about the universe, including that space is not a fixed, rigid backdrop, like a stage on which cosmic events play out. Instead, Einstein showed that space is flexible and influenced by the objects and events within it. Very massive objects create curves in space, kind of like the way a bowling ball curves a mattress when placed on top of it.

(Einstein also showed that space and time are intimately linked — both are threads in the universal fabric that he called space-time. We'll gloss over this relationship for the sake of brevity.)

The Laser Interferometer Gravitational-Wave Observatory, better known as LIGO, was the first experiment ever to directly detect these ripples in space-time, so it's the first direct physical evidence that they actually exist. Its first detection came in September 2015, 100 years after Einstein first predicted their existence. It's also been 40 years since people started working on the early incantations of the technology that LIGO uses to detect gravitational waves.

So these ripples in space-time confirm Einstein's theory (although it had already been shown to be fairly airtight). Gravitational waves are an extreme illustration of general relativity; in the past, those extreme examples existed only on paper, in the theoretical world. Data can always help scientists learn more about the universe, and if Einstein's theory needs to be adjusted (to make it compatible with quantum mechanics, for example), it's possible LIGO could find where. (LIGO's executive director said he's doubtful that LIGO will find these kinds of cracks or lose ends in Einstein's theory, but it is a possibility.)

The LIGO discoveries have "launched a new era in astronomy," according to a statement from Northwestern University, where scientists are studying the gravitational waves to try to understand the black holes that created them. Other sources with LIGO have also talked about a "new era" or "new field of astrophysics," or have noted that LIGO is opening "a new window" to the universe.

That's a big claim. So how is LIGO driving this revolution?

Think of it this way: If every observatory and telescope in the history of humanity allowed people to "see" the universe, LIGO is now allowing us to "hear" it. And no one has ever heard the universe in this way before. Imagine what it would be like to suddenly gain not just a new view of the world around you, but the ability to detect an entirely different kind of information.

Just about every observatory or telescope that is studying the universe collects light — or, in some cases, other particles. Light comes in many flavors, such as X-rays, gamma-rays, visible light and radio waves. Different objects radiate different wavelengths of light. For example, your body produces enough heat to radiate infrared light, but it would take something as hot as an electric stove to radiate optical light. Looking at the universe in different wavelengths of light reveals different objects and processes, and sometimes, it reveals things that are hidden for other reasons.

OK, but what if you want to look for an object that doesn't radiate light?

Black holes are called black holes because they have such a strong gravitational pull that even light can't get away from them. As a result, they're typically represented in images and illustrations as big, black spheres in space — they don't emit light, and they don't radiate light.

There are other ways to "see" black holes. For example, sometimes material around the black hole radiates light, and that can at least reveal the silhouette of one of these monsters. It's also possible to detect a black hole via its gravitational influence on stuff around it. (This is also how scientists detect dark matter, more mysterious stuff that makes up a big part of the universe.)

Plus, a purist will tell you that all of those above methods are indirect. If someone wants information created directly by the black hole, then gravitational waves are it.

So LIGO can see things that no other observatory can, and that's a big reason why people are calling this the beginning of a new era of astrophysics. LIGO will spot many other objects, including exploding stars (supernovas) and mergers between neutron stars, or the nuggets of leftover star explosions that are just slightly not dense enough to become black holes.

But there will also be great discoveries when LIGO works with light-based telescopes and observatories. Those instruments can "see" the universe, and LIGO can "hear" it — and they're best when used together, just as movies are best when they are both seen and heard or food is best when both tasted and smelled. "Multimessenger astronomy" refers to the combination of different kinds of astronomical information, such as light and gravitational waves. It's a new chapter in astrophysics, and LIGO has just given it a big boost.

The mass of a black hole provides some insight into how it formed. All four of these black holes were likely born from single, massive stars. Those stars burned brightly, but then ran out of fuel and collapsed on themselves, crunching matter into such an incredibly small space that the density of the remaining object cannot be clearly described by modern physics.

But the specifics of each star's living situation can vary, according to Vicky Kalogera, an astrophysicist at Northwestern University and a member of the LIGO Collaboration.

The smaller black holes detected by LIGO probably formed from stars that lived close together, stayed together after death and eventually spiraled toward each other and merged. Contrast that with black holes that are close to 20 times the mass of the sun, which likely formed ingreat clusters of stars (a "mosh pit" of stars, as the statement from Northwestern University described it).

How many black holes form in clusters, and how many form outside clusters? How many black hole mergers take place in the universe each day? How big do these black holes get? Can they reveal any new information about the monster black holes at the centers of galaxies, which have masses that range from millions to billions of times the mass of the sun?

These are questions that scientists now have a better shot at answering because they can detect black hole mergers directly, and quickly figure out the exact masses of those black holes.

LIGO detected two confirmed black hole mergers in its first science run, which lasted about six months. Currently, LIGO is operating at only about 40 percent of the sensitivity it was designed to achieve. Gradual improvements by the LIGO team will slowly drive that percentage up, and with each bump in sensitivity, LIGO is expected to detect more and more objects. According to David Reitze, executive director of the LIGO Laboratory, if the detector is 25 percent more sensitive in its next run (which starts in September), the LIGO Collaboration can expect six to eight detections, instead of two.

LIGO's discovery means a lot of things to the astrophysics community; it might actually be the beginning of a new era.