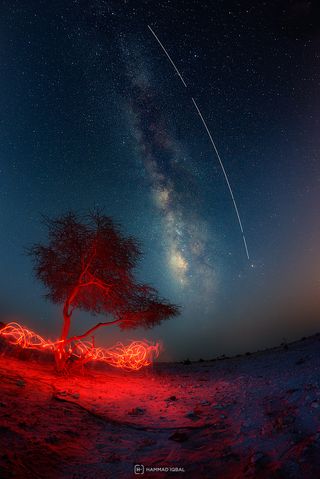 Astrophotographer Hammad Iqbal took this image of a perfectly parallel pass of the ISS to the Milky Way from Doha, Qatar on May 6, 2016.
(Image: © Hammad Iqbal | Hammad Iqbal Photography )

In the desert of Qatar, the ISS made a perfectly parallel pass to the vertically oriented Milky Way.

Astrophotographer Hammad Iqbal took this image from Doha, Qatar on May 6, 2016.

"The sky was crystal clear due to dry weather and with a red LED headlamp, a bit of fiery light painting around a tree made for a striking contrast between the foreground and background," Iqbal wrote in an email to Space.com.

The Milky Way, our own galaxy containing the solar system , is a barred spiral galaxy with roughly 400 billion stars. The stars, along with gas and dust, appear like a band of light in the sky when seen from Earth. The galaxy stretches between 100,000 to 120,000 light-years in diameter. [How to Photograph the Milky Way in Light Pollution (Photos )]

The International Space Station (ISS) is a laboratory for new technologies and an observation platform for astronomical, environmental and geological research. As a permanently occupied outpost  in outer space, it serves as a stepping-stone for further space exploration. The space station flies at an average altitude of 248 miles (400 kilometers) above Earth.

"I have never been able to get both the ISS and Milky Way in a single shot before, and a parallel alignment of the two is definitely even more rare to get," Iqbal said.