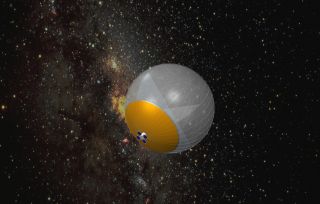 A space-based version of the Large Balloon Reflector could be used to float a 20- to 30-meter (66 to 98 feet) telescope, the Terahertz Space Telescope, into space to investigate the evolution of the universe.
(Image: © Christopher Walker)

A giant balloon could forever change the way astronomers look at the stars.

Technology under development by a 2014 NASA Innovative Advanced Concepts award winner aims to raise a telescope directly into space, nestled inside a balloon the size of a football field.

Christopher Walker, an astronomy professor and professor of optical sciences and electrical engineering at the University of Arizona, won Phase 2 funding from the program two years ago and is now seeing his concept come to life. [The World's Biggest Telescopes: How They Stack Up]

He calls it LBR, for large balloon reflector. The balloon would consist of an inflatable, half-aluminized spherical reflector inside a much larger stratospheric balloon. The outer balloon would also act as protection for the telescope once in position outside Earth's atmosphere.

Walker said he hopes to launch the balloon to about 120,000 feet (37,000 meters) above Earth. When looking up, it would act as a particularly powerful telescope, free from almost 99 percent of the atmospheric absorption that keeps telescopes on Earth from seeing certain wavelengths of light, Walker said. That would allow the telescope to scan the universe in far infrared. Measuring those wavelengths could help scientists not only see stars that already exist, but also pinpoint where new stars are likely to form, NASA officials said in a statement.

LBR could serve as more than a telescope as well. When the balloon is looking down, it could sense changes in the Earth's atmosphere and greenhouse gases and eventually become a hub for telecommunication, Walker said.

Now, Walker and his team are working on a space-based version of LBR, which he's calling the Terahertz Space Telescope (TST). TST would monitor space for the formation and evolution of galaxies. Once in space, the instrument would shed the large outer balloon and leave the balloon's spherical reflector.

"You're not fighting gravity to make it spherical," Walker said in the statement. "It makes it structurally easier to achieve very high tolerance of 'sphere-isity.' In space, the sphere can be radiatively cooled to very low temperatures, allowing a better view of the distant universe."

As of now, though, TST is still just a concept and needs more development to determine whether it's feasible both technologically and economically.

"It's a tough road ahead, but we'll keep pushing forward," Walker said. "I'm hopeful I can get people motivated and excited about the concept … to think outside the box."