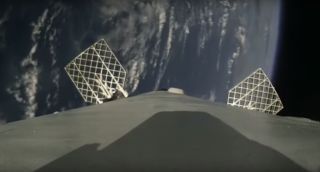 The first stage of SpaceX's Falcon 9 rocket comes back down to Earth for an ocean landing on May 27 after launching the Thaicom 8 communications satellite.
(Image: © SpaceX)

An amazing new video lets viewers ride along with the SpaceX rocket that landed on a ship at sea last week.

The time-lapse rocket-landing video, which crams an entire descent and landing into just 30 seconds, shows the first stage of SpaceX's Falcon 9 booster re-orient itself in space shortly after launching the Thaicom 8 communications satellite on May 27. The rocket then comes zooming back down through the clouds for a pinpoint touchdown on the robotic ship, which SpaceX named "Of Course I Still Love You."

The video, which was recorded by a camera aboard the rocket, captures many details of the return and landing process, from the deployment of the booster's stabilizing "grid fins" and landing legs to the final engine burn that enabled the soft, vertical touchdown on the deck of "Of Course I Still Love You." [More Photos of SpaceX's Thaicom 8 Launch & Rocket Landing]

It was the third consecutive successful ocean landing for SpaceX. Falcon 9 first stages also came down onto "Of Course I Still Love You" on April 8, during the launch of SpaceX's robotic Dragon cargo capsule toward the International Space Station, and on May 6, during the liftoff of the JCSAT-14 communications satellite. (These landings all took place while the Falcon 9's upper stage was still carrying its payload to orbit, so they did occur during, rather than after, the launch.)

These touchdowns are part of SpaceX's effort to develop rapidly and fully reusable rockets, a key priority for the California-based company and its billionaire founder and CEO, Elon Musk. Such technology could dramatically cut the cost of spaceflight, Musk has said.

Indeed, SpaceX eventually plans to refly the rocket stages that come down to Earth. The booster that touched down in April may launch again sometime this summer, Musk has said. (The stage that landed in December is going to be put on display at SpaceX's headquarters.)

The company has said it would prefer to bring all of its rockets back on land, because doing so would streamline the inspection and reflight process. But some missions require so much fuel that boosters can't make it all the way back to the launch site, which explains the need for "drone ships" stationed in the ocean.