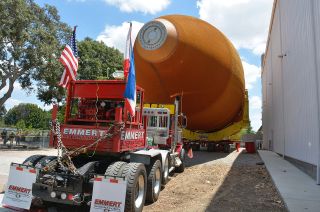 LOS ANGELES — The day after its widely-celebrated road trip through Los Angeles, NASA's last remaining built-for-flight space shuttle external tank still needed to be moved a short distance before it could be considered at "home" at the California Science Center.

The massive tank, referred to as ET-94, completed the 19-hour move through the city's streets on Saturday (May 21), traveling the 16 miles (26 kilometers) from Marina del Rey to Exposition Park. It came to a stop on the lawn between the Science Center, Natural History Museum and the L.A. Coliseum at about 7 p.m. PDT (0200 GMT May 22), when the crew overseeing its move decided to call it a night. [Photo Gallery: External Tank’s Road Trip to CA Science Center]

"After everyone got a few hours' sleep, the move continued this morning," wrote Dennis Jenkins, the Science Center's project director for its space shuttle Endeavour display, in an email sent on Sunday. "We now have ET-94 [parked] in its temporary storage location beside the pavilion housing Endeavour."

The outdoor storage — literally, a concrete landing pad — will be where ET-94 remains until the new Samuel Oschin Air and Space Center is ready to house it, Endeavour and a pair of twin solid rocket boosters to create the only fully-authentic vertical display of a space shuttle launch vehicle anywhere in the world. The exhibit is slated to open to the public in 2019.

"[A] permanent fence will go up on Tuesday (May 24), then we will begin restoring the tank so that it can take its place in the Samuel Oschin Air and Space Center," Jenkins said.

On Monday, workers will remove the dollies that enabled ET-94 to traverse the city, cross over Interstate 405, drive by The Forum sports arena in Inglewood and roll onwards to the Science Center. It will then be up to Jenkins' team to prepare the tank for its ultimate towering display.

"Structurally, the tank is in excellent shape," said Jenkins in an interview earlier this year. "However, over the years, NASA has removed all of the orbiter attachment hardware, feedlines, pressurization lines... essentially everything that normally sits on the outside of the tank."

NASA earlier donated the orbiter mounting hardware to the Science Center and later provided the other components before the tank left its assembly facility in New Orleans on a five-week, 5,000 mile (8,000-km) ocean voyage to L.A.

"Now we need to reinstall it," said Jenkins, who previously worked as a space shuttle engineer. "And then, of course, we have to fix the foam."

ET-94 was never launched into space — had it been flown, it would have been destroyed during its fall back into the Earth's atmosphere, just as the other 135 tanks that were built for flight were lost — but it was used in the wake of the 2003 space shuttle Columbia tragedy to test changes needed to safely return the orbiters to flight.

"The Columbia accident investigation board dissected a lot of the foam on the tank to better understand how the foam worked," said Jenkins. "Somewhat later, NASA removed a lot of foam around the intertank flanges (between the liquid oxygen tank and intertank and between the intertank and liquid hydrogen tank) for engineering evaluations. So there is a fair amount of foam that needs to be repaired."

"In addition to repairing the 'acreage' foam, we will need to recreate all of the ice-frost ramps, bipod ramps, etc. So it's a big project," Jenkins said.

Beginning this week, the public can come to the California Science Center to see ET-94 and watch as work begins to ready it for Endeavour's display.

"Even though we got it on site Saturday night, the welding and getting it fixed into place [was still on-going] Sunday," said Jeff Rudolph, the president of the California Science Center. "So our formal viewing area for the public will open on Monday." [Photos: Space Shuttle Fuel Tank ET-94 Comes Ashore]

"The public will be able to view the tank and observe the work we are performing," said Jenkins.

The restoration will lead up to the tank being mated with Endeavour and solid rocket boosters, the latter still to be delivered. Jenkins and his team plan to assemble the "stack" horizontally and then raise it to the vertical — a first for a space shuttle. When NASA was flying the vehicle, the components were integrated only in the vertical inside the voluminous Vehicle Assembly Building at Kennedy Space Center in Florida.

"We're still working through the final details," Jenkins said. "The short version is that it will be a horizontal mate. We will build up the tank and boosters on a cradle and then lift Endeavour onto the horizontal stack."

The complete space shuttle will then be backed into the Air and Space Center and tilted up using cranes and jacks.

See photos from the external tank’s road trip and it being parked at the California Science Center at collectSPACE.