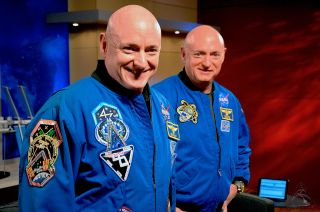 Former NASA astronauts and identical twins Scott and Mark Kelly are being honored with the renaming of their elementary school in West Orange, New Jersey.
(Image: © collectSPACE.com)

A New Jersey elementary school is about to become the newest member of the "crew" of U.S. educational institutions that have been named for astronauts.

On Thursday (May 19), Pleasantdale Elementary School will be formally renamed in honor of Mark and Scott Kelly, former NASA astronauts who attended the school while growing up in West Orange, New Jersey.

Mark flew on four space shuttle missions, including commanding the final mission of the orbiter Endeavour, while his identical twin brother Scott flew to the Hubble Space Telescope and served twice aboard the International Space Station, including the first one-year mission on board the orbiting outpost. [Twins in Space: NASA's Twin Astronauts Mark and Scott Kelly (Photos)]

This is the first school to be named for Mark and Scott, individually or as a pair, but it is just the latest to be named for NASA astronauts in both New Jersey and across the United States.

A dozen U.S. astronauts have hailed from New Jersey, dating back to one of the nation's first seven space explorers.

Walter "Wally" Schirra Jr., one of the original Mercury 7 astronauts selected in 1959, was born in Hackensack, New Jersey, in 1923. A graduate of Dwight Morrow High School in Englewood, New Jersey, and the Newark College of Engineering, Schirra's name now graces the entrance to an elementary school in the Garden State's Old Bridge Township.

The Walter M. Schirra Elementary School is in good company in Old Bridge, as the township is home to six other schools named for astronauts, including Schirra's fellow Mercury pilots Alan Shepard, Virgil "Gus" Grissom, John Glenn, Scott Carpenter and Gordon Cooper. The seventh school is named for James McDivitt, who commanded the Gemini 4 and Apollo 9 missions.

Another Gemini and Apollo astronaut — and New Jersey native — was just recently honored with a school that was named for him in the town where he was born. Buzz Aldrin, who walked on the moon with Neil Armstrong during the Apollo 11 mission, has grade schools named after him in Virginia and Illinois, but it wasn't until last year that the Montclair Board of Education voted to rename Mount Hebron Middle School for the moonwalker.

According to his website, Aldrin plans to visit Montclair for Buzz Aldrin Middle School Day in September.

New Jersey is also home to Christa McAuliffe Middle School, one of the many educational centers named for the fallen "Teacher in Space" who died with the crew of the space shuttle Challenger in 1986.

Schools were also named for the members of NASA's two other fallen crews, the three Apollo 1 astronauts lost in a fire on the pad in 1967 and the astronauts who were aboard space shuttle Columbia in 2003.

Other NASA astronauts with schools bearing their names include first man on the moon Neil Armstrong, who has more than a dozen institutions named for him; first American woman in space Sally Ride, including elementary schools in California and Texas; moonwalker and first space shuttle commander John Young, in Orlando, Florida, where he attended grade school; and first African-American astronaut Mae Jemison, in Hazel Crest, Illinois.

Editor's note: Space.com and its partner collectSPACE.com are media supporters of the Pleasantdale Elementary School renaming ceremony to honor the Kelly astronaut brothers.