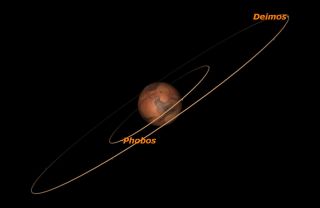 Mars is in opposition to the sun on May 22, and closest to Earth on May 30. This is generally a good apparition, but Mars is low in the southern sky for northern observers. It is visible all night in Scorpius.
(Image: © Starry Night Software)

As we arrive at the midpoint of the spring season, we examine some of the prominent stars and constellations (and planets) that are visible on these balmy spring evenings.

One thing that is becoming more apparent, even to those who do not pay much attention to the night sky, are the later sunsets. From New York City, for instance, the sun has been setting slightly more than a minute later each evening during April. And the time that the sky becomes completely dark, the end of astronomical/evening twilight, has gotten even later: 43 minutes later on April 30 than on April 1.

This changing time of evening twilight causes an effect that many constellation watchers notice only subconsciously. From February through May, the stars' seasonal westward drift seems to go especially fast. If you observe when it gets completely dark, winter constellations like Orion the Hunter and Taurus the Bull seem to zip across the sky and disappear before you know it. Conversely, from late July through early November, the Summer Triangle (composed of the stars Vega, Deneb and Altair) as well as other summertime groups seem to hang around forever. [The Best Night-Sky Events of 2016: What to Watch for This Year]

Take, for instance, Thursday (May 5): the midpoint of spring.

When the sky becomes completely dark, only the stars marking the horn tips of Taurus and the ruddy star Betelgeuse in Orion's shoulder are still visible very low in the west-northwest sky. Compare that to the midpoint of autumn (Nov. 7), where we can still readily find the Summer Triangle more than two-thirds up in the western sky when darkness falls. Even the familiar Teapot of Sagittarius, another summer staple, is still evident low above the southwestern horizon.

The stars of spring are not as dazzling as the stars of winter — and yet at dusk 10 bright stars of the first-magnitude are visible at once. No other season, including winter, offers so many.  Orion the Mighty Hunter is the constellation most associated with the winter season, but for the spring that distinction must go to Leo, the Lion. In the beginning of March, we saw its bright sickle of stars marking the lion's furry mane and head in the east at dusk, giving us the first sign that the cold winter season is mostly behind us. The constellation shines high in the south when the stars appear in early May's sky, and it follows the sun closely to its setting in the west by midsummer. At the bottom of the constellation's sickle is the bluish first-magnitude star Regulus, one of the four "royal stars" that were supposed long ago to rule over the four quarters of the sky.

East from the sickle there is a right triangle of stars; the easternmost star in this trio is Denebola, marking the tip of the lion's tail.

Cats are notorious for their intense hatred of getting wet, chiefly because the cat's fur becomes waterlogged and weighs it down. Lions are members of the cat family, and whenever I'm giving a show at New York's Hayden Planetarium I tell my audience that the best way to draw out the "big cat" that is Leo is to get him wet. "So," I say, "let's find the Big Dipper and imagine we fill the bowl with water." I then suggest that we drill an imaginary hole at the bottom of the bowl, thereby allowing all the water to spill out. And who does that water spill onto? Leo!

Other spring star patterns include Boötes, the Herdsman, which is found by following the curve of the handle of the Big Dipper down to the brilliant orange-yellow star Arcturus, located at the bottom of a long kite-shaped figure extending close to the Dipper's handle. If you extend the curve from the Dipper's handle past Arcturus you'll eventually come to the bluish-white first-magnitude star Spica. Spica is the brightest star in Virgo, the Virgin, which resembles a Y-shaped line of moderately faint stars.

Not far to the west (right) of Spica is a little four-sided figure of fairly bright stars, like a triangle whose top has been removed by a slanting cut. That's Corvus, the Crow. Immediately to the right of Corvus are the faint stars of Crater, the Cup, which outline a goblet. A pity that it's composed of rather faint stars, but on clear, dark nights free of haze and bright lights it can be easily traced.

The Crow and Cup sit on the back of the largest and longest constellation in our skies, Hydra the Water Snake. It sprawls below Leo and Virgo and has one reasonably bright second-magnitude star, the reddish Alphard.

"Big Jupe," The Red Planet and "Lord of the Rings"

Finally, almost acting as a "punctuation mark" to our current evening sky, Jupiter lies in the middle of this year's spring array. Jupiter, the "King," is the solar system's biggest planet and it is rivaled in the sky only by the moon and Venus. Like Leo, Jupiter is near the meridian high in the south when it first gleams through the fading daylight after sunset. After darkness falls, Jupiter shines below the Lion all evening as the brightest "star" in the sky, a grand sight for both naked-eye and telescopic observers to behold.

Later in May, we'll be able to enjoy the sight of the Red Planet Mars, which makes its closest approach to Earth in more than a decade and will appear as a dazzling yellow-orange ember low in the southeast as darkness fades. Not too far behind Mars, appearing by late evening, will be Saturn shining in sedate splendor with a yellow-white glow; it's rings now tilted nearly to their maximum extent and making for a glorious sight even in small telescopes.