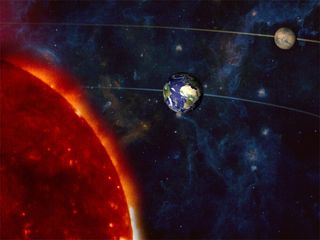 Mars will be at opposition soon, meaning the Red Planet and the sun will be on opposite sides of Earth, giving the best possible views of the Martian surface. This artist's concept imagines Mars at opposition in December 2007.
(Image: © NASA)

This spring, Mars will appear the biggest and brightest it's been in over a decade, and here are the best times to see it.

It is not often that Earthlings get a good look at Mars. To begin with, it's a small planet, and it spends most of its time far away. Usually skywatchers see it as just a tiny, fuzzy, orange blob in the eyepiece. The only time they get a good look at its surface markings, clouds, dust storms and changing polar caps is around the time of its oppositions — when Mars appears diametrically opposite to the sun in the sky — which happen at intervals of a bit more than two years. And not all Mars oppositions are created equal: The best ones come in bunches of two or three, which repeat in a cycle that averages 15 to 17 years long.

This is going to be a special spring for Mars. The Red Planet is going to appear bigger and brighter in May than it has in nearly 13 years. At its best, in late May, the planet will appear nearly twice as bright and more than 18 percent wider than at its previous good opposition, in April 2014. In fact, from late April until mid-July, Mars will be closer to the Earth than at any time since 2003; from April 25 to July 10 this year, the planet will remain larger in apparent size than it ever got at its last opposition, two years ago. [Skywatching Mars: 2016 Is a Great Time! (Video)]

Due to its distinctly noncircular orbit, Mars will not be closest to the Earth until more than a week later, on May 30. That day, the tiger-hued world comes to within 46.8 million miles (75.3 million kilometers) of Earth, 10.6 million miles (17.1 million km) nearer than in 2014. This is also less than five months before Mars comes to perihelion — its closest point to the sun — on Oct. 29. Thus, the 2016 apparition can be termed favorable or perihelic.

On July 4, just over a month after Mars' closest approach this year, the planet will be at one of its own equinoxes. So when Mars appears at its largest and brightest, skywatchers get to see nearly all of the Red Planet from pole to pole. Mars' southern hemisphere is coming out of winter, so a prominent ice cap should be visible.

The only problem for telescope owners in midnorthern countries will be the Red Planet's low position in the sky. Frustratingly enough, whenever Mars has an especially close opposition, it is in the southern part of the zodiac. For latitude 40 degrees north, Mars will climb no higher than 28 degrees above the southern horizon in the middle of the night. If you remember that the width of your clenched fist is equal to roughly 10 degrees, you'll see that when Mars is at its very best, the planet will appear less than three fists above the horizon. Therefore, observers at midnorthern latitudes will find the planet relatively low above the horizon, where the atmospheric conditions for viewing tend to be poor. This seriously limits the amount of detail visible telescopically, except perhaps on the steadiest of spring nights. The farther south you live the better, when it comes to viewing the Red Planet: Observers in the Southern Hemisphere are ideally placed, with Mars crossing high overhead. [Mars from Orbit: Photos from NASA's Mars Reconnaissance Orbiter]

This week, Mars comes up above the eastern horizon just before midnight. A few hours later, the planet will catch your eye low in the southeast sky, appearing as a yellow-orange star, shining at a respectable magnitude of +0.9 not far from the 3rd-magnitude star Zubenelgenubi in Libra, the Scales. But by May 22, the day Mars reaches opposition, the planet rises near sunset for midnorthern observers. Mars then attains a magnitude of -2.1, and with its pumpkin-hued radiance, it will be a truly imposing sight. It will glow 8 degrees west of the so-called "rival of Mars," Antares, just ahead of the three stars marking the claws of Scorpius.

Mars is steadily moving eastward against the background stars, but that course will soon appear to slow, almost seeming to waver, as if it had become uncertain. Finally, on April 17, the planet will pause and come to a halt. Then, for the next two months, it will reverse its course in the heavens and move backward against the star background, toward the west, almost as if it had lost something. Then, on June 29, the planet will pause again, before resuming its normal eastward direction.

All the planets exhibit this "retrograde motion" at one time or another. But for the longest time, the ancient astronomers were unable to come up with a satisfactory explanation for it. For one thing, while behaving in this strange manner, Mars will also appear to deviate somewhat from its normal course; the retrograde motion will appear to bring it a little below its regular orbital track. In other words, for those watching from Earth, Mars will appear to travel in a loop. The Greeks held that the sun, moon and planets moved in perfect circles around the Earth, so the loop presented a particularly difficult phenomenon to explain.

Ultimately, their solution required the planets to move around the Earth in smaller "epicycles," a small circle whose center moves along its main orbital circle around Earth. This led to complex, coil-like curves that didn't quite match the actual observations of the planets. In actuality, the apparent backtracking occurs because the Earth and Mars are both orbiting the sun.

As the time of Mars' closest approach gets nearer, we'll have more to say about it. So stay tuned.

Joe Rao serves as an instructor and guest lecturer at New York's Hayden Planetarium. He writes about astronomy for Natural History magazine, the Farmer's Almanac and other publications, and he is an on-camera meteorologist for News 12 Westchester, N.Y. Follow us @Spacedotcom, Facebook and Google+. Original article on Space.com.