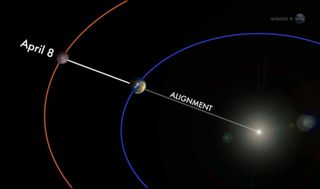 Mars lines up with the Earth and sun on April 8, 2014 in a what scientists call an "opposition." Oppositions of Mars occur every 26 months when the Red Planet and the sun appear on opposite sides of Earth.
(Image: © NASA)

Mars aligns with the sun and Earth today (April 8) in a cosmic event that occurs just once every 26 months, and you can watch it all unfold live online.

The Red Planet and the sun sit directly opposite each other in Earth's sky today, which is why the formation is known as an opposition of Mars. You can watch two live shows about the Mars opposition here on Space.com beginning at 7 p.m. EDT (2300 GMT) tonight, courtesy of the Virtual Telescope Project and the Slooh. You can also watch the two webcasts directly via the Virtual Telescope Project website and Slooh website.

During opposition, Mars will shine nearly 10 times more brightly than a 1st-magnitude star, and some of the planet's surface features will show up through backyard telescopes, Slooh officials said. [Mars Coming Close: Where to Look (Video)]

Mars "is the only planet in the universe that shows distinct and sometimes detailed surface features through our telescopes," Slooh astronomer Bob Berman said in a statement. "It is also the most Earth-like body in the known universe, with oxygen copiously bound into its soil, and water contained in its ices.

"Therefore, during the brief few weeks when it comes near to us every 26 months, it deserves the limelight," Berman added. "This year it hovers next to Virgo’s hot blue 'alpha' star Spica, creating a striking orange-and-blue color contrast that’s out all night long, and impossible to miss."

Both of tonight's shows will feature up-close looks at the Red Planet. The Virtual Telescope Project's webcast kicks things off at 7 p.m. EDT; Slooh's show — which will also discuss the activities of NASA's Curiosity rover and the possibility of finding signs of life on Mars — follows at 10 p.m. EDT (0200 GMT on April 9).

The opposition of Mars comes about a week before the Red Planet's closest approach to Earth. On April 14, Mars will be just 57 million miles (92 million kilometers) away — about 60 percent of the distance from Earth to the sun (which is 93 million miles, or 150 million km). (Opposition and closest approach would occur on the same day if the planets' orbits were perfectly circular rather than slightly elliptical.)

April 14 is a busy day for space enthusiasts. That date also features a total lunar eclipse, as well as the launch of SpaceX's third NASA-contracted cargo mission to the International Space Station.

Editor's note: If you take an amazing skywatching photo of Mars or any other night sky view, and you'd like to share it for a possible story or image gallery, please contact managing editor Tariq Malik at spacephotos@space.com.