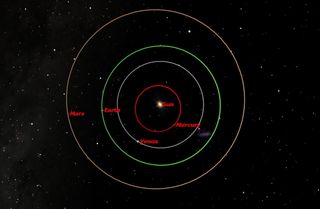 Seen from above the sun's north pole on April 8, Mars, Earth and the Sun will lie in a straight line, called "opposition."
(Image: © Starry Night software)

Editor's Update (April 8): The opposition of Mars will be visible live online in two webcasts. For details on how to watch, read: Mars, Earth and Sun Align Tonight: Watch It Live Online

Mars will be exactly opposite the sun in the sky in a rare cosmic alignment set to take place Tuesday (April 8).

Called an opposition, this happens with Mars from Earth's perspective every 778 days, or 2 years, 1 month and 18 days. Think of Earth and Mars as two cars racing on circular tracks. Because Earth is closer to the sun, it travels faster, completing a circuit in 365 days. Mars is farther from the sun and takes longer, 687 days. By the time Mars has completed one circuit, Earth has a lot of catching up to do to get to a point between the Red Planet and the sun.

This is complicated by the fact that the two racetracks are not exact circles. As Johannes Kepler discovered in the 16th century, the planets follow slightly elliptical paths around the sun, sometimes closer to the Sun (perihelion), sometimes farther away (aphelion). [Best Night Sky Events of April 2014: Stargazing Sky Maps (Gallery)]

Some planets, like Venus and Earth, follow paths that are almost perfect circles. Other planets, like Mercury and Mars, follow more elliptical orbits, which are described as being more eccentric, or differing from a circle.

On the day of opposition, Mars, Earth and the sun fall on a straight line. Six days later, both planets will have moved a little along their orbits, but, because of the eccentricity of its orbit, Mars will be slightly closer to Earth than it was before.

If you look at the complete orbits of the four inner planets, you can see how Venus and Earth follow almost perfect circles centered on the sun. The orbits of Mercury and Mars are slightly askew.

If you look closely at Mars' orbit around the 4 o'clock point, you'll see a little tick mark, which indicates Mars' perihelion, the point when it's closest to the sun. If Earth is somewhere in the same quadrant, Mars will be much closer to Earth than it is right now, when it's on the far side of its orbit from perihelion.

From a practical point of view, Mars appears as a very tiny object in most amateur telescopes, almost always a disappointment to a beginner looking at it. The detailed images you see online are almost always made by combining hundreds of individual frames by a process called stacking, which minimizes the "noise" caused by the turbulence in Earth's atmosphere.

To see that sort of detail at the eyepiece requires tremendous patience, waiting for the rare instants when the Earth's atmosphere steadies, allowing the fine detail to pop into view. At those instants of clarity, you will see Mars' polar cap and traces of its subtle differences in terrain.

Editor's note: If you take an amazing skywatching photo of Mars or any other night-sky view, and you'd like to share it for a possible story or image gallery, please contact managing editor Tariq Malik at spacephotos@space.com.