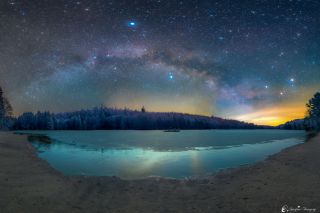 Minutes before clouds gathered over the night sky, astrophotographer Matt Pollock caught this snapshot of the Milky Way.

"Despite gathering clouds and the rapid approach of dawn, I managed to hike in, set up my tripod and align my Astro Track to the north star and get the 3 shots spaced 60 degrees apart necessary to capture the full arch of our home galaxy with its core peeking out through the haze, clouds and incoming fog," Pollock wrote in an email to Space.com.

The Milky Way is a spiral galaxy stretching between 100,000 and 120,000 light-years in diameter. It is estimated that the galaxy has approximately 400 billion stars. The brighter stars of the summer triangle  are located in the center segment of the arch. The three bright orbs on the lower right are Saturn, Antares and Mars, which appears larger than normal due to a fog bank rolling in from the southeast causing light diffusion as well as the camera filter Pollock used for this image. [Simple Stargazing: Explore the Milky Way ]