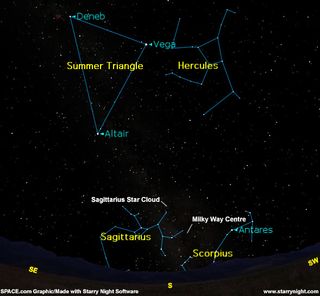 The sky as of Aug. 13 at 10 p.m. local time from mid-northern latitudes. Stars shift sligthly from night-to-night, but the map is relevant through the end of the month.

The Moon will be at New phase on Aug. 15 and won't be much of a hindrance to stargazing through this upcoming week. This combined with the fact that many people are now enjoying some leisure time in rural settings, where skies are dark, means it is an optimum week to check out the beautiful summer Milky Way.

As soon as darkness falls, the Milky Way becomes evident from many locations as a wide glowing arch of variety and beauty, stretching across the sky from the northeast to southwest.

Sweep up with binoculars from the Scorpion's tail, through the Summer Triangle, and down to Cassiopeia and Perseus. You'll find concentrations of stars, clusters, large apparent gaps such as the Great Rift in Cygnus -- actually a vast cloud of light-blocking space dust -- and more stars than you thought existed.

No longer a mystery

Never visible from large cities with their bright lights, smoke and haze, the Milky Way can still be readily viewed from distant suburbs and rural locations. Before the invention of the telescope, the true nature of the Milky Way Galaxy ("Gala" is Greek for milk) was a mystery.

A lot is known, now.

Our galaxy's center is about 30,000 light years away toward the Sagittarius star cloud; its outer edge is about 20,000 light years in the opposite direction (toward Auriga and Taurus). The Sun and all the outer stars of the galaxy revolve around it at the rate of some 155 miles per second (250 kps). It apparently requires about 200 million of our Earthly years to make one complete revolution, or one "cosmic year," around the center of our galaxy.

At the center of the Milky Way is a massive black hole, containing as much material as about 3 million or 4 million Suns.

When astronomers began to realize that there were other such vast congeries of stars, they called them "island universes," but this was an obvious misnomer; since universe means everything there is, it can hardly have a plural. So they settled on galaxies, which is a compromise as a new meaning for an old word.

Unfortunately, because of the tremendous increase in light pollution over the past quarter century, the majority of our current generation have never seen the night sky in all its grandeur.

In his book "Nightwatch," Canadian astronomer Terrence Dickinson comments that in the aftermath of the predawn 1994 Northridge, California earthquake, electrical power was knocked out over a wide area. Tens of thousands of people in southern California rushed out of their homes, looked up and perhaps for the first time in their lives saw a dark, starry sky.

In the days and weeks that followed, radio stations and observatories in the Los Angeles area received countless phone calls from concerned people who wondered whether the sudden brightening of the stars and the appearance of an eerie silvery cloud (the Milky Way) might have caused the quake.

"Such reaction," notes Dickinson, "can come only from people who have never seen the night sky away from city lights.

Map the Milky Way!
Starry Night software brings the universe to your desktop. Map the sky from your location, or just sit back and let the cosmos come to you. LEARN MORE!