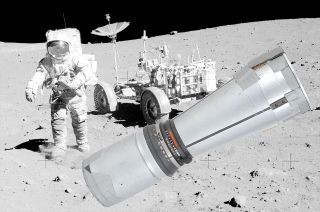 Apollo 15 commander David Scott is auctioning the telephoto lens he used on the surface of the moon in 1971.
(Image: © NASA/RR Auction)

The first telephoto camera lens used by an astronaut on the surface of the moon is now the focus of a week-long auction that also features a prototype moon buggy and a collection of astronauts' space memorabilia to benefit a scholarship fund.

The one-of-a-kind flown Zeiss Tele-Tessar 500mm f/8 lens, which Apollo 15 commander David Scott extensively used as he explored the moon's Hadley Rille in 1971, opened at $50,000 on Thursday (April 14) as part of an online space and aviation sale organized by RR Auction of Boston.

The lens is estimated to sell for $400,000 to $600,000 by the time the sale concludes on April 21. The auction can be found at rrauction.com. [How to See Where Astronauts Walked on the Moon]

"This special lens was an integral part of the Hasselblad camera I used throughout the four lunar surface missions at the Hadley Apennine site, as well as two days in lunar orbit," Scott wrote in a letter accompanying the lens' sale.

Produced especially for the Hasselblad EDC (electric data camera) by Carl Zeiss AG, the telephoto lens measures 12 inches (30.5 cm) long. Its silver finish was chosen in order to maintain more uniform internal temperatures while in the extreme heat of the lunar surface.

The body of the lens bears several affixed Velcro tabs and the lens cap and rear are covered in duct tape, which Scott signed on the rear in felt tip pen, "D. R. Scott." The tape is believed to be from a roll flown on the mission and retains some lunar dust.

Scott used the lens to take 293 photographs during the 12-day Apollo 15 mission. According to RR, the lens displays the expected scuffs and wear from its use in space and on the moon, including a tumble that Scott took while walking on the lunar surface.

"This lens allowed Scott to take amazingly clear images of areas far from reach during the mission that would have otherwise been impossible to obtain," Robert Livingston, RR Auction's executive vice president, said in a statement. "This is a quintessential piece of photographic equipment used extensively on the lunar surface."

Scott, the seventh man to walk on the moon, brought the lens back to Earth, where it became a souvenir of his third and final spaceflight.

"I received the [Zeiss] lens from NASA as a memento of the mission and it has been in my personal collection since that time," Scott wrote.

A law passed in 2012 reaffirmed the Apollo-era astronauts' titles to the flown hardware they retained as keepsakes.

The 672-lot auction includes other flown items from Scott's personal collection, as well as other astronauts' items from the other Apollo flights and artifacts spanning the history of space exploration, from Project Mercury through the space shuttle program. [Moon Memories: Thousands of Apollo Photos Released Online]

In addition to the lens, another highlighted lot from the sale is a prototype lunar rover believed to have been driven by rocket scientist Wernher von Braun.

The Local Scientific Survey Module, built in 1965 by Brown Engineering for the NASA Marshall Space Flight Center in Alabama, preceded the development of what became the Apollo lunar roving vehicle that Scott was the first to drive on the moon.

The test article made headlineslast year after an Air Force historian spotted it parked in a backyard. Later moved to a scrapyard, NASA tried to obtain the moon buggy to have it restored for display, but was unable to reach an agreement with its current owner.

Thirty-eight of the sale's other lots are being sold to benefit the Astronaut Scholarship Foundation (ASF), the non-profit organization founded by the Mercury astronauts to award college students pursuing science, math and engineering degrees. Among the charity sale's items are flown mission patches, training checklists used by Apollo 13 crew mates James Lovell and Fred Haise and shirts that were worn by astronauts aboard the space shuttle.