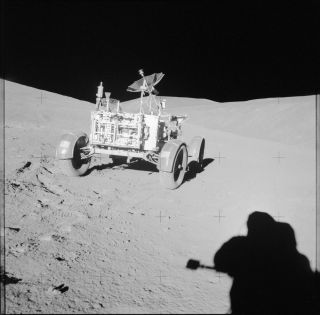 An image of the lunar surface captured by astronauts during NASA's Apollo 15 mission in 1971.
(Image: © NASA)

A huge new online gallery gives people around the world an up-close look at NASA's iconic Apollo moon missions of the late 1960s and early 1970s.

More than 8,400 unprocessed scans have now been uploaded into the online Project Apollo Archive. The entire gallery — with each picture organized by the magazine or film on which it was shot — is available on the photo-sharing service Flickr.

As a whole, the set represents every picture ever taken on the moon, and many that were shot during other parts of the missions, founder Kipp Teague told The Planetary Society. Teague requested the shots years ago from NASA as part of a project related to Eric Jones' Apollo Lunar Surface Journal website, which details what the astronauts did on the moon. [Lunar Legacy: 45 Apollo Moon Mission Photos]

These are my favorite three shots of the bunch:

The July 1969 Apollo 11 mission is (naturally) best known for being the first to land humans on the moon, but what struck me about this image is how clear a view it provides of Earth. Parts of the magazine it came from, in fact, flip between views of the Earth and moon.

While perhaps the comparison was coincidental — the astronauts were assigned photography targets for much of their mission — the contrast between the living Earth and the desolate moon really shows after seeing image after image.

The 1970 Apollo 13 mission — which spawned a Hollywood film 20 years ago, in 1995 — turned from a moon-landing mission into one of survival after an explosion crippled one of the two spacecraft.

In one of the most famous fixes in spaceflight history, the Apollo astronauts adapted a command module filter so that it would fit in the lunar module and scrub the air of poisonous carbon dioxide. This was done with assistance from the ground and represents only one of the many crises the crew overcame during their mission.

Apollo 15, which launched in July 1971, was one of the more science-oriented missions of the program; the astronauts received extensive geology training before embarking on their exploration of the moon's Hadley Rille.

This photo shows Dave Scott and Jim Irwin working together on the surface, but in shadow. To me, it shows how transient the missions were in history (the longest stay on the moon was about three days) and how fleeting humanity's existence is compared to the history of Earth and the solar system.

You can explore the entire gallery online here: https://www.flickr.com/photos/projectapolloarchive/albums