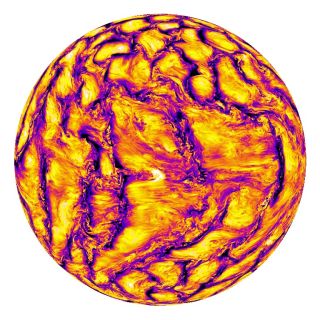 A high-resolution simulation of the movement of plasma in the sun reveals how a large-scale, coherent magnetic field can still exist despite small-scale chaos.
(Image: © Hideyuki Hotta, Chiba University)

A new study, and some gorgeous simulations, may have revealed how order arises from disorder in the turbulent, chaotic body of the sun.

In the sun, change is the norm. The body of the sun is a swirling cauldron of fluid, constantly in motion. Every 11 years, the suns magnetic poles migrate across the star's surface, and switch positions. During the peak of this switch, astronomers notice a significant uptick in explosions on the sun's surface that are more energetic than hundreds of hydrogen bombs.

One solar mystery that has baffled scientists is how the sun produces a large-scale, coherent magnetic field when there seems to be nothing but chaos at smaller scales. In other words, how is it that small-scale disorder leads to large-scale order? A new series of high-resolution simulations may have cracked the case. [High Resolution Simulations of the Sun Solve Solar Mystery: Video]

The orange and magenta swirls seen in the top frame of the image above show the motion of plasma in the sun. Plasma is a superheated gas in which the electrons orbiting the nucleus aren't entirely bound to their orbits. Freeing up these charged particles makes the whole mix electrically conductive.

These new simulations were created by a team of researchers led by Hideyuki Hotta, an assistant professor in solar physics at Chiba University in Japan.

The movement of charged plasma can lead to changes in the sun's magnetic field on a small scale, as is apparent in the top pane of the image above. Watch the video at the top of this article to see how quickly the plasma changes over a period of weeks. The bottom pane (in black and white) maps the sun's magnetic field. The similarity of these two highly chaotic, rapidly changing patterns makes it clear that these two things are tied to each other.

So if the magnetic field on the surface of the sun is so disordered, how is it that Earth's nearest star still has a large-scale, unified magnetic field?

Previously, calculations suggested that if the sun's material had a viscosity below a certain threshold, there would be no way for a large-scale, coherent magnetic field too form, Hotta told Space.com in an email. A low viscosity means the material flows more freely, and faster; a low viscosity in the sun's plasma would essentially create too much chaos at the small scale.

But observations of the sun showed that the viscosity is in fact well below that threshold, Hotta said. So how does the large-scale magnetic field arise?

The new computer models have allowed Hotta and his colleagues to essentially rebuild the sun in a computer, and see the activity of the magnetic field in high resolution, at both large and small scales. By doing so, they can watch how the small-scale conditions give rise to the large-scale conditions. By performing these simulations in lower resolution, the researchers demonstrated how the large-scale magnetic field essentially disappears from the model. It's only with sufficient detail that they can watch the order arise from disorder.

The sun's 11-year cycle of magnetic field reversal is of great interest to solar scientists (the Earth's magnetic field poles also migrate, switching positions about every 200,000 to 300,000 years). But it is also important for everyone living on Earth. The solar explosions that increase at the peak of the solar cycle can fling showers of powerful particles toward Earth, potentially causing damage to satellites or even power grids. Better understanding the cause of these cycles could help humanity prepare for these solar onslaughts.