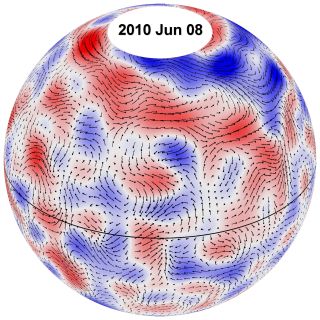 Colossal spiral-shaped flows of super-hot plasma have been discovered on the sun, completing a nearly 50-year quest to confirm their existence, scientists say.

These giant solar plasma spirals — each of which is at least 60,000 miles (100,000 kilometers) wide — could help spark the formation of strongly magnetic regions on the sun that have been linked with solar flares and other sun eruptions, researchers added.

The sun's internal heat causes matter to rise to its surface, where the material cools when near the cold of space, and then sinks back downward. This cycle of motion is altogether known as convection, and zones where it takes place are known as convection cells. [Solar Quiz: How Well Do You Know Our Sun?]

The rotation of the sun on its axis causes the largest convection cells to form circular, spiraling patterns.

"These are a lot like weather patterns seen on Earth — vortices that spiral and turn all over the place," study author Lisa Upton, a solar scientist at Vanderbilt University in Nashville, told SPACE.com. Convection in Earth's atmosphere is ultimately driven by heat from the sun; the rotation of the Earth then makes convecting air on Earth spiral.

Super cells on the sun

Scientists have suggested the sun might possess even larger convective cells for nearly five decades. These giant cells were expected to be about 120,000 miles (200,000 km) deep and wide, spanning the entire convection zone of the sun, the outermost third of the star's interior.

"You have to have something like these giant cells to help explain why the sun's equator rotates so rapidly,"study lead author David Hathaway, an astrophysicist at NASA Marshall Space Flight Center in Huntsville, Ala., told SPACE.com.

These giant cells are expected to each last months, helping transport incredible amounts of heat generated in the sun's core to its surface.

"They ultimately help drive the sun's 11-year sunspotcycle, and should also help active regions — highly magnetic areas — form," Hathaway said. These violently active regions underlie activity such as sunspots and explosions such as solar flares and coronal mass ejections, which drives space weather that can damage electronics on Earth and in orbit.

The hunt for giant sun cells

The problem in finding these giant cells is how slow they were expected to flow, making it difficult to identify their influence on the surface of the sun. Now, by using NASA's Solar Dynamics Laboratory, researchers detected these humongous structures.

The researchers followed the motions of supergranules for days. This helped them identify the patterns of flow caused by the giant cells.

"People have been looking for these cells for 45 years," Upton said. "A combination of having the right data and the right techniques ultimately led us to observe these features on the sun."

Matter flows in these cells at speeds of about 18 mph (30 km/h). The spirals are at least 60,000 miles (100,000 km) across, and can last for at least three months. As expected from the effects of the sun's rotation, these cells flow clockwise in the north and counterclockwise in the south — in both cases, around high-pressure regions.

"Now we have to figure out how big an effect these giant cells have on the emergence of active regions on the sun's surface, and what that means for space weather," Hathaway said.

Hathaway, Upton and their colleague Owen Colegrove detailed their findings in the Dec. 6 issue of the journal Science.