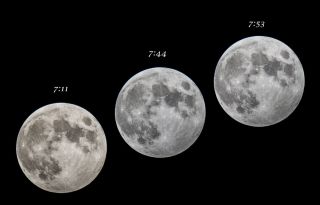 Earth's shadow will darken part of the moon Wednesday morning (March 23) in a lunar eclipse that will be visible from much of the globe, including central and western North America.

But don't get too excited, skywatchers. Wednesday's lunar eclipse is of the penumbral variety, and the effect will therefore be subtle and subdued compared to the jaw-dropping "blood moons" caused by total lunar eclipses.

Earth's shadow is composed of two parts: the dark, inner umbra and a faint, outer portion called the penumbra. As the term suggests, penumbral eclipses involve the moon dipping into the penumbra (but steering clear of the umbra). Weather permitting, well-placed observers who look carefully Wednesday morning should be able to see the moon's lower portions take on a smudged appearance. [How Lunar Eclipses Work (Infographic)]

The penumbral eclipse will last for 4 hours and 15 minutes Wednesday, but it may be noticeable for only a few minutes around 7:47 a.m. EDT (1147 GMT), the time of greatest eclipse, Space.com skywatching columnist Joe Rao wrote in our lunar eclipse guide last week.

People in central and western North America are in good position to witness greatest eclipse, but folks in the eastern parts of the continent will miss out; by that time, the moon will already have set from their perspective.

Observers throughout the Pacific Ocean region, New Zealand, Japan and eastern Australia will be able to see the entire penumbral eclipse, and skywatchers in eastern and central Asia will witness part of it. But Africa and Europe will be completely shut out, Rao wrote.

Lunar eclipsesoccur when the moon dives into Earth's shadow, during the satellite's full phase. But eclipses don't happen every month, because the moon's orbit around Earth is slightly out of plane with the planet's path around the sun.

When the moon, Earth and sun line up exactly right, a total lunar eclipse results. Partial and penumbral eclipses occur when the alignment is a little bit off.

Editor's note: If you capture an amazing photo of the eclipse or any other night-sky sight that you'd like to share for a possible story or image gallery, send images and comments to Managing Editor Tariq Malik at spacephotos@space.com.